#adventcalendar.Window 3 is opened & it's a carol singer,come and see our own carol singers on 12 December at 7pm! pic.twitter.com/YmrGmsGHwL 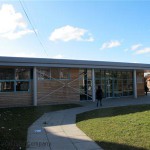 City of York Council is running a series of NHS Health Online Sessions at libraries in Acomb, Tang Hall and Clifton throughout December.

The sessions are ideal for those new to using computers and aim to help York residents become more computer literate in an increasingly online world.

END_OF_DOCUMENT_TOKEN_TO_BE_REPLACED

The new archive is part of the Heritage Lottery Fund-supported Gateway to History project to preserve and open up the city’s internationally-important archives to people across the city and indeed the world. 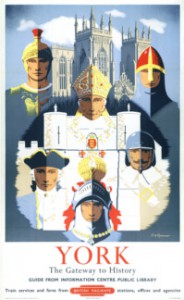 The works at York Explore will include the construction of a new state-of-the-art conservation store for the archives and a sensitive refurbishment of the existing first floor to create new spaces for people to discover the city’s extensively-recorded history.

Essential work on the roof and floor will also be carried out to on the Grade II listed library building at the same time as installing a new energy-efficient heating system, repairing the roof, refreshing the layout of the ground floor and the very successful café.

The Gateway to History project received a £1.5m HLF grant in December 2012.

END_OF_DOCUMENT_TOKEN_TO_BE_REPLACED

Hands up who loves Shark in the Dark by Nick Sharratt! Come by on Thursday 10.30 for storytime and join in the fun! pic.twitter.com/Ecwa0YCF7T

York Libraries are seeking volunteers to help with a range of activities.

Examples of areas where residents could help include:

• Help with the Archives ‘A City Making History’ project

• Help read stories to under 5s (all libraries except York Explore)

• Help us with the annual children’s Summer Reading Challenge

• Help out at author events

• Help with shelving our books (all libraries except York Explore)

• Help with our regular booksales

• Help to get people online and learn computer basics

More details can be found by clicking here.

York Libraries are being privatised by the Labour run Council.

While generally we want to see residents fully involved in their local libraries, it would be a shame if professional standards were jeopardised.

Libraries should continue to be the centre of our local communities.

We're having a book sale on Saturday 19th October. Fiction & non-fiction titles. A home full of books is a happy one! pic.twitter.com/0NsKxjpRpp

Overall use of York’s libraries fell by over 3000 last year. 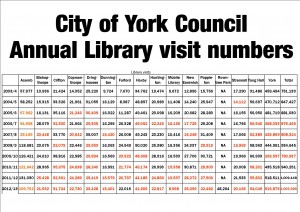 However just over 1 million visits were recorded which is still above the average for City’s of a similar size.

Every Library in the City except Fulford showed a reduction.

The overall fall would have been even greater had it not been for the newly opened Rowntree Park library which attracted nearly 50,000 users. However the new library depended on a large number of special events to attract visitors and it is too early to judge its long term attractiveness. 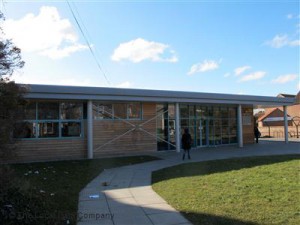 It appears that the Council has taken its eye off the ball recently with the controversial plan to privatise the library service having apparently affected staff morale while at the same time monopolising senior management time.

Even Labour Party supporters are unhappy with this plan with one member taking the opportunity to speak against the proposals at the last Council meeting.

The concern is that Labour are trying to distance themselves from the library service before reducing the subsidy available (and thereby forcing closures).

The largest drop in numbers was at the Acomb Library. This may be because special events – such as evenings with prominent authors – have been fewer in number recently.

A plan to locate Council customer facing staff from the housing and neighbourhood teams at the library was scrapped by Labour when they took office in 2011. This made it more difficult for the building to become the “hub” for activities in the Acomb area.