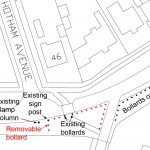 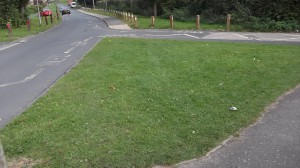 Additional bollards are to be installed to deter parking on, and damage to, the verge outside the school. 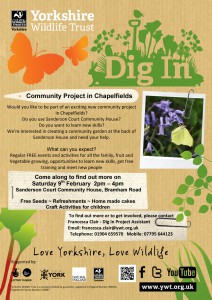 A public meeting is being held which will interest potential supporters of the community garden which is planned for the rear of the Sanderson Community House on Bramham Road.

Although the Council web site is erratic at the moment you should be able to see a map of salt bin locations by clicking here.

These are the locations of the 170 salt bins which the Council now claims to have filled.

These are the locations of the salt bins which should be routinely refilled. 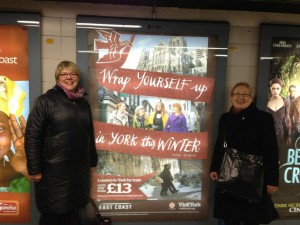 Not for the first time this month, Council leaders have abandoned the City in search of more glamorous surroundings. At the peak of the bins crisis they had a jaunt to London pausing only to pose next to a “Visit York” poster at a tube station. 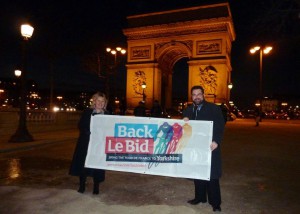 Today they are in Paris for the official launch of the “Tour de France”. Just how many launches this cycle race really needs is open to question.

The absence of the Leader of the York Council would be unlikely to be noticed.

Meanwhile it has become clear (below) what will happen to the junk that has built up in many salt bins over the last year, now that the Council is desperately trying to re-fill many of them. 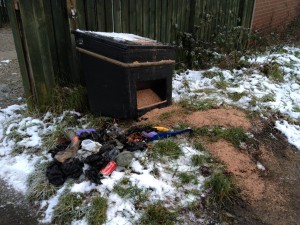 Police hunt York robbery suspects
York police are appealing for information following a robbery in the city.It occurred at around 2.30am on Tuesday 15 January 2013, on Layerthorpe, when a 19-year-old woman was walking past the car park at the rear of the old ATS buildings.

Bus driver arrested on suspicion of drink driving
A bus driver from York has been charged with drink driving after being arrested yesterday afternoon. The 45-year-old man failed a roadside breath test after officers pulled over the single-decker bus he was driving on Field Lane in the Badger Hill area of York at around 12.50pm.

North Yorkshire Police has become the first UK force to publish an iBook to help keep their communities safe from criminals.

The innovative iBook, which is called Securing Your Home, features 60 pages of crime prevention advice and can be downloaded from the iTunes store or the North Yorkshire Police website.

The interactive tool contains hundreds of tips on how to protect your home, including chapters on bogus callers, burglary prevention, property marking, vehicle security and rural crime. 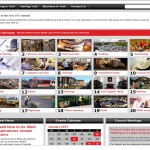 The York Council has made a badly misjudged decision to launch a modified web site in the middle of what is proving to be a demanding week for public services in the City.

It is currently not possible to use the site to report problems with snow and ice clearance (& other public services).

The Council has also removed public access to (historic) Freedom of Information responses.

The new web site should have been thoroughly tested (off-line) before being dumped on an ill prepared City.

Labour Councillors, who decided earlier in the year not to refill 170 salt bins across the City, have apparently now admitted that the decision was unwise.

They say that the bins will now be filled over the next 24 hours. Former Council Leader Andrew Waller had written on Monday to Cllr Leftie Levene, who is responsible for the chaos, saying that the bins should be filled before the worst of the freeze set in. Andrew had photographed and reported 20 empty bins in the Westfield area over the weekend.

Apparently the Council has also received dozens of complaints from residents this week about its poor “winter maintenance” policies and it was this pressure that led to the rethink. 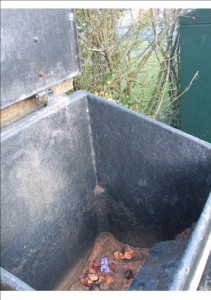 It will be too little, too late in some areas like Parker Avenue where pensioners have been struggling on the steep incline there for the last few days.

Nor has Labour said how it will deal with those bins which are packed with rubbish.

Many bins have lost their lids meaning that salt seeps away (or congeals). Others have disappeared.

Difficult to think of a poorer set of decisions really. One has to go back as far as 1st January 2013, when the refuse bins weren’t emptied, to find anything comparable!

If your local salt bin needs refilling we recommend that you Email the Council with the details. ycc@york.gov.uk

It will in future operate only as a day time “commercial” service. The route links Beckfield Lane to York City centre and beyond. The service currently provides the only link to the new Sports Village on Hull Road.

Other decisions were to:

• Invite tenders for replacement services on revised routes 24 (minus the Cornlands Road -Acomb link) & 26 (minus the Askham Bar – Foxwood Lane link). The 26 would continue to serve the St Stephens Road and Ascot Way areas. These services currently have a £153,900 a year Council subsidy.

• Provide a Monday to Saturday hourly daytime 15 service to the South Bank area of York. A plan is to be put in place “to solve the issues surrounding the route 15 should Council funding not be available”.

The meeting agreed to make representations to First about problems with the 5 and 13 services which had been highlighted by residents.

Public consultation “both online and at a public meeting” is promised

Public asked for help to locate missing York man. York police are appealing for help to trace a missing man.
William Notley, 55, of Malbys Grove, York, has not been seen since mid-morning on Monday 14 January 2013, when he was dropped off by a colleague at Askham Bar. STOP PRESS Man has now been found.

Fund launched for tragic officer’s family A fund has been set up to help the young family of PC Andrew Bramma who tragically died in the line of duty.
Temporary Chief Constable Tim Madgwick, of North Yorkshire Police, and Sgt Mike Stubbs, of North Yorkshire Police Federation, announced the launch of the fund today after receiving numerous offers of support for PC Bramma’s family from people throughout the country.