Periodically in York someone rediscovers the Holy Grail. A “light bulb” moment produces a plan for a central bus station, river buses or an ice-skating rink. Feasibility studies are dusted off from previous incarnations. Costs/practicalities soon act as a sedative for the excitement generated.

So we may see the same again as plans for a riverside walk on the Coney Street side of the river Ouse were unveiled earlier in the week. It was coupled with a reincarnated plan to provide a pedestrian footbridge from North Street to the walkway near City Screen.

Of course, over the centuries, the attractions of the riverside have been recognised by successive generations. New Walk – south of the City centre – was created as long ago as 1730.

Within the historic core, the importance of riverside access owes part of its genesis to the work of JB Morrell in 1940’s York.

Successive strategic plans for the City have urged developers and landowners to make provision for a walkway behind Coney Street. Some have done so, most recently in the area around City Screen. The Council made no such provision for “permeability” as part of its current Guildhall renovation plans.

The extra pedestrian bridge plan is much more recent invention. The brainchild of a Labour Councillor in the 1990s it was dubbed a “bridge to nowhere” even when it seemed possible that it might also accommodate cyclists. It remains an expensive irrelevance at a time when funds are tight.

Consultants have now produced a brief. 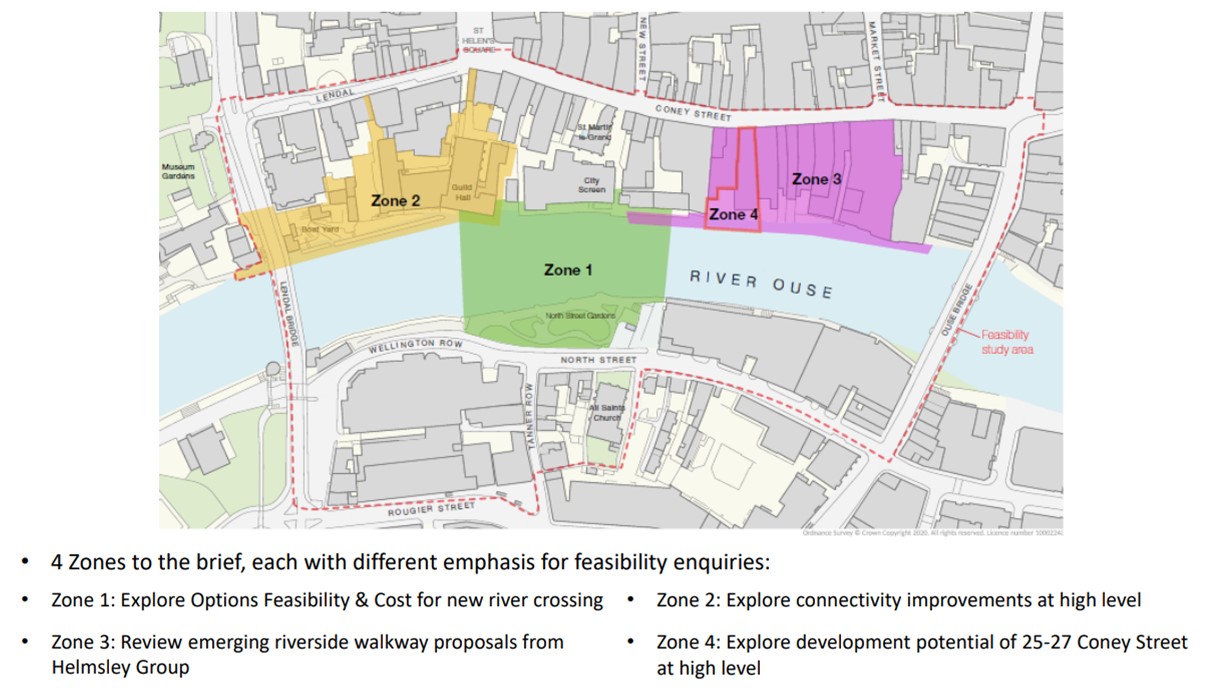 The latest plans do have the support of a local private developer who has a significant land interest on Coney Street.  That should be encouraged.

The Council must, however, stop short of borrowing any more money to support its plans. The City is already too heavily in debt.

In the meantime, early progress on the scheme depends on the success of a bid for central government funding. Quite when this, apparently never-ending, source of funding will dry up remains to be seen.

We suspect that it will be several generations before it is possible to walk along the whole length of the river Ouse in the City.