A grant of up to £2,500 per business has been made available by the Leeds City Region Local Enterprise Partnership (LEP) for flood incurred damage costs that are not covered by business insurance policies.

Council officers are going door-to-door, visiting businesses who have been affected by the recent flooding to provide an update on the current situation in York and answer any potential queries.

As part of the engagement, businesses are being notified of the additional funding to support the clean-up and help alleviate costs incurred by flood water.

The business recovery fund is open for application for flood affected businesses and eligibility will be determined by evidence provided. Funding is not guaranteed for flood damaged businesses.

To submit an application form via Make It York, please visit: www.makeityork.com or email business@makeityork.com

Businesses and residents are also invited to attend flood drop-in sessions to discuss support before, during and after a flood in the near future:

END_OF_DOCUMENT_TOKEN_TO_BE_REPLACED

In September the current operator of services 3A and 12, First York, announced that they planned to withdraw service 3A (the 7-day per week evening Askham Bar Park & Ride service) and part of service 12 (specifically the section between Foxwood Lane and Alness Drive) as they were “no longer commercially viable”.

The Council agreed to subsidise the services until the end of the financial year, while seeking tenders for their continuation.

The Council is being recommended to use part of a government funded bus service operators grant (worth £150,416 in total) to subside these two services. The Council already allocates over £700,000 a year for bus service subsidies (not including the cost of the free pensioners bus pass, which is funded from central taxation).

The Council is banking on the two services being more popular in the future and therefore requiring a lower subsidy.

Improvements in other bus services

Through the “Funding for Local Bus Services 2020-21” scheme, the council has the opportunity to bid for £83.5k one-off funding in order to achieve one or more of the following objectives (which must deliver an increase in services and therefore the 12 and 3A services are not eligible as they currently exist):

The funding must be used for the provision of local bus services- i.e. time tabled services open to any member of the public upon payment of a fare.

The funding available in York is £83.5k – equivalent to the operating costs for a single bus for approximately 8 months. It would not therefore have a major impact on service levels.

Its not just the burgeoning number of potholes that are causing problems for cyclists. The Council has fallen behind in many areas with its white line refreshment programme.

The Council is being recommended to ditch a trial which has seen City Tour buses converted to run on battery power. Apparently, a trial of “retrofitting” buses to run on electricity, started 5 years ago, has been judged a failure due to reliability problems.

A grant to convert some of the 6 open-top buses used on York’s City Sightseeing tour service from diesel engines to be fully electric was approved in 2013. The buses had been criticised during the last decade  for affecting air quality standards on some of the City’s narrower streets.

A report to a meeting next week says that in York , and other open top tour city’s, the conversion has not achieved high reliability standards. Only 4 buses were converted and many of the services provided by them had to be run by substitute diesel powered buses.

A “Clean Air Zone” has been introduced in the City centre. This means that those buses regularly accessing the City centre must either be electric or must meet the more stringent Euro VI diesel emission standards.

It is understood that the operators of the services have tried to obtain open topped low emission vehicles but currently none are available either as electrics or with Euro VI standard engines at affordable prices..

It looks like the open top service will cease later this year with conventional layout buses being substituted.

NB. There has been extensive investment in electric buses in the City. York will have one of the UK’s highest proportion of mileage operated by electric buses once the new park and ride electric fleet arrives over the next 3 months

As previously reported, the York Council has abandoned its plans to build a care and nursing home on the Lowfields site. It had been unable to find a development partner for its scheme. 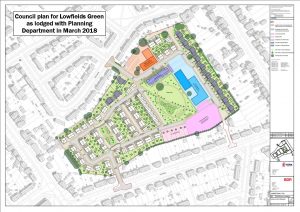 A meeting next week will hear that the plot (on the old school footprint) will be offered for sale to private developers with the condition that they construct “extra care” independent living units there.

The Council expects to receive around £450,000 for the site.

Independent living homes are aimed at the elderly. The scheme has similarities to the Hartrigg Oaks neighbourhood on the other side of the City.

This proposal effectively takes us back to 2010 when the original plans for the site – although much smaller and retaining a large amount of green space – envisaged its use as a “care village”. The site is ideally placed for easy access to a full range of services on Front Street.

Homes would be offered on a leasehold basis and would be ideal for homeowners seeking to “downsize”.

“Communal social facilities” would be included and might be also be made available to over 55’s living in the flats and bungalows which are currently being constructed.

The Council (rightly) claims that older people want to retain their independence and that there is a general trend away for care institutions. The Council has been closing its existing elderly persons homes over recent years. Closures have included Oakhaven on York Road although this site has also been unused now for over 4 years. 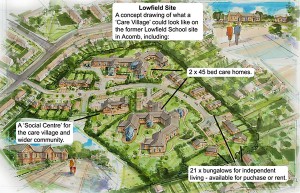 The Volte-face at Lowfields will inevitably mean more delays. The Wates development is expected to be complete in 2022. Work on the independent living unit would not start until 2021.  It could be another 3 years (or longer) before construction traffic finally moves off the site.

The new plan – which is welcome if very belated – comes a few days after residents complained about the current contractors leaving generators running during the through night period. It took some time to resolve the issue.

On 24th March (7:00pm) residents are due to hear an update on the project when local Councillors hold a meeting in the Acomb Methodist Hall on Front Street. The future of the communal housing, self-build, playground, police station and doctor’s surgery parts of the plan are likely to be under considerable scrutiny.