Archaeological investigations have uncovered a previously unknown Roman road, currency and an abundance of Roman pottery at the site of the Guildhall as restoration work continues.

Over the last six months, York Archaeological Trust (YAT) has been working on behalf of City of York Council, to monitor and record any archaeological deposits or features that are exposed through the ongoing redevelopment and restoration work of VINCI Construction UK at the Guildhall complex.

While much of the site has, in the past, been extensively disturbed by modern drains and foundations, some significant discoveries have been made.

In the South Range area of the development, the excavation of new foundation trenches recently revealed an area of cobbled surface dated to the Roman period. Buried over 1.5m below modern street level, the surface contained an abundance of Roman pottery and a silver coin. Furthermore, the excavation of a small trench revealed that three distinct surfaces had been laid, suggesting that it remained in use for a considerable period.

The relatively rough construction of the surface may suggest that it represents a yard or lane rather than a main road, however, its location is significant. The surface is situated close to both the projected location of the Roman crossing point over the River Ouse and the junction of Roman road 2 (broadly followed by modern Coney Street) and the Via Praetoria; the road leading into the Porta Praetoria gatehouse and under modern Stonegate to the centre of the Fortress. 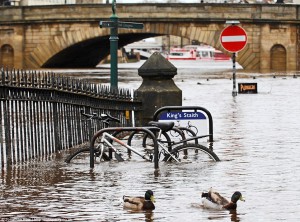 City of York Council will be keeping its temporary defences in place over the weekend as a precaution and to reassure residents, visitors and businesses that York is open for business.

The latest advice from the Environment Agency (EA) is that the River Ouse is expected to peak between 3.8 and 4.1m during the weekend. That is significantly lower that has been seen over the last 2 weeks when flood defences held successfully.

The Met Office has put in place a yellow rain warning for today into the evening and early Saturday across the Pennines. There is a further rainfall band which is being monitored by Met Office for Saturday night.

Frontline teams will remain on standby over the weekend for floods and also for gritting, having worked for several weeks, 24/7, in shifts since Storm Ciara.

To-date the council has deployed over 6,000 sandbags and has around 25 pumps operating across the city.

The council is continuing to monitor the situation 24 hours a day – working closely with partners including the Environment Agency.

The council continues to work closely with the York and North Yorkshire Local Resilience Forum, which includes police and fire services as well as North Yorkshire County Council, Met Office and Environment Agency.

Councillor Keith Aspden, Leader of City of York Council said:
“Although river levels are falling, there is a further rainfall expected. As a precaution we’ll be keeping our defences in place over the weekend to keep the city safe, moving and open for business

The York Council is planning to reduce the Business Rates burden on 1650 retail outlets and pubs in the City.

The Council says that properties that will benefit from the relief will be occupied hereditaments with a rateable value of less than £51,000 that are wholly or mainly being used as shops, restaurants, cafes, drinking establishments, cinemas and live music venues.

The proposal is likely to be good news for those businesses that publicly criticised the Council for what they claimed was a lack of response to their problems during the recent floods.

It is thought that the move could also encourage new businesses to occupy empty properties in the City.

The report says, “As with the previous schemes businesses often fail to apply so the council will automatically award the discount to all the properties that can be identified as meeting the criteria. It will be the responsibility of the business to complete and return state aid forms or risk the award being rescinded”.

There is no cost to the council in providing either discount which will be fully reimbursed by Central Government through the “rates retention system”. The scheme will apply for 2020/21 only unless the government renews the funding support next year

In an unconnected development, the Council is today inviting residents to sign up for FREE suicide prevention training workshops in the City

People are being encouraged to sign up for free suicide prevention training workshops in York next month as part of the #TalkSuicide campaign from local NHS and council organisations.

The Humber, Coast and Vale Health and Care Partnership is hosting two workshops in York on Tuesday, 10th March 2020 at Mariott Room, York Library, Library Square, York YO1 7DS – and members of the public are invited to attend to learn life-saving skills.

These one-hour workshops, which will run between 9.30am-10.30am and 11am-12pm, are free to attend but it is essential to register beforehand. You can register at bit.ly/talksuicideyork.

There were 6,507 registered suicides in the UK in 2018 – which amounts to one death by suicide every 80 minutes. Yorkshire and Humber had some of the highest rates of suicide in England in 2018.

Completing the training at the workshop will help you to:

The workshops are part of the Partnership’s #TalkSuicide campaign, which aims to reduce the stigma around talking about suicide by raising awareness about suicide in our communities and encouraging our people to complete suicide prevention training.

Jo Kent, Suicide Prevention Lead for the Humber, Coast and Vale Health and Care Partnership, said: “Every death by suicide is a tragedy and in Humber, Coast and Vale we are working collaboratively with the NHS, councils, voluntary organisations and other groups to prevent suicides from happening in our communities.

“The suicide prevention training is integral to this work as those who complete the training can make a real difference in their communities, simply by being better placed to identify those people who might be suicidal, and knowing what to say to them and signposting them to the most appropriate services.

“We want to train as many people as possible in our communities so if you can spare an hour on the morning of Tuesday, 10th March please register for one of the free suicide prevention training workshops taking place in York – the skills you learn could help you save someone’s life in the future.”

Can’t attend either of the York workshops? Workshops are also being held in Scarborough, Beverley, Hull, Scunthorpe and Grimsby during March. Visit talksuicide.co.uk to find out when these workshops are taking place.

You can also complete the training on the talksuicide.co.uk website, where you can also find out more about the #TalkSuicide campaign.