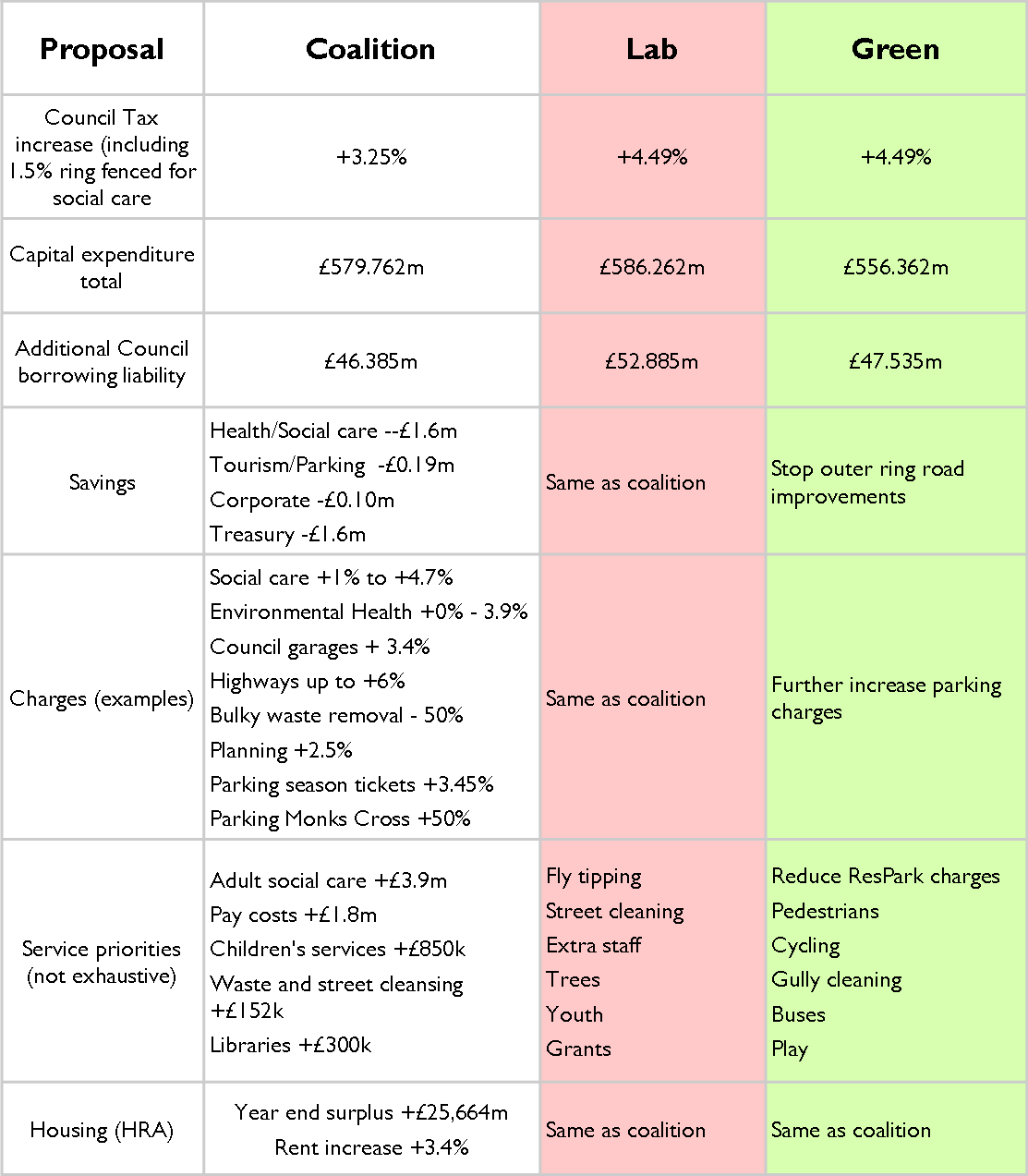 With the Council elections scarcely 2 months away, decisions on the York Councils budget are likely to be clouded by posturing. All the parties will want to appear to be investing in providing better public services and will highlight those that voters have been most vocal in criticising.

A decision on the Councils budget takes place tomorrow (Thursday)

The coalition has decided to sink together. They are weighed down by historic decisions particularly on capital expenditure priorities and levels. They will hope, for example, that electors don’t notice that they intend to spend £20 million on a “business club” at the Guildhall. That’s money that would be better  invested in repairing local roads.

Labour’s alternative budget will not be moved by its Leader, Janet Looker. Instead Cllr Neil Barnes – who is set to quit the Council in May anyway – has taken up the poisoned chalice. Despite the Council owing record amounts of money and facing the prospect that over 20% of tax revenue will be used to service debts (interest) charges in future, Labour want to borrow even more, Nearly £7 million more in fact. They say that they will spend it on road repairs and energy efficiency programmes. Expenditure on both is already substantially increased under the Coalition proposals.

Labour show no sense of irony in their proposals, several of which seek to reverse cuts made when they were in power between 2011 and 2015. Most notable is the sudden interest in road repairs which they cut by 25% leading inevitably to the decline in standards which we see today. .

The Greens provide an entertaining approach to fiscal prudence. They at least recognise the implications of increasing debt. They might reduce it. Unfortunately they choose to do so by abandoning improvements planned to reduce congestion on the outer ring road. They substitute an array of cycling and pedestrian schemes apparently oblivious to the fact that they have no control over the regional funding stream which would pay for most of the outer ring road scheme.

The Greens are also going for the maximum Council Tax increase of 4.49%.

In the end they find that they are spending more than they are raising so they propose to raid the Councils reserves to the tune of £358,000.

We doubt that either of the amendments will be passed. In effect they are simply a platform which allows opposition parties to claim at the elections  that they would invest more in high profile public services than their opponents.

Such claims have always found their way into election manifestos. Party’s depend on the fact that electors will not look back very far to see what budget amendments had been moved in previous years. If they did then the level of inconsistency – and opportunism – would become more apparent.

There are some good ideas in the proposals from all the parties.

The present system doesn’t allow for a cross fertilisation  of ideas.

A return to the committee system – where all parties can input into the budget build process in a transparent way – might help but it remains to be seen whether that proposal finds its way into any of the election manifestos this year.