The school kitchen and dining room have undergone an ambitious refurbishment, turning a tired and dysfunctional space into an efficient facility where staff can prepare nutritious lunches for the x pupils.

Cllr Andrew Waller, Deputy Leader and Executive Member for the Environment, City of York Council, said: “This has been a major refurbishment scheme for the school and so pleased that the staff, students and community will now get the opportunity to reap the rewards of all the hard work as a One Planet York project.”

The kitchen and dining refurbishment at Westfield Primary school was to completely change two very large connected spaces that were bowing under the weight of their inefficiency.  The only way to solve the problems was to take a holistic One Planet approach and transform all aspects of these areas from the roofs down.

The result is one where we can say that energy efficiency has been truly optimised: 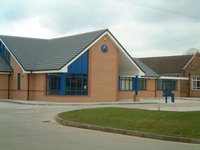 The leaking roofs over the dining room and kitchen have been entirely recovered;

Insulation has been installed between the roof spaces;

LED lighting has been installed throughout which will make a huge difference to the reduction of electrical output;

The kitchen has been completely re designed, reducing clutter and making the kitchen operation slicker;

A new servery now makes queuing for meals a faster operation whilst allowing the pupils to see the food as it is being served;

School staff now have the space to guide pupils in and out of the queue to new dining tables;