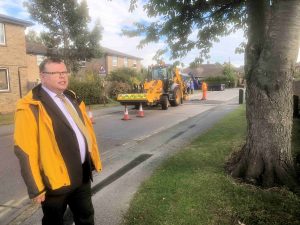 Andrew Waller who is backing the petition

A petition has been handed to the York Council demanding that roads in the Kingsway West/Ascot Way area be improved before there is any additional development in the area.

At the moment the only access to the estate – which contains over 600 homes – is via the section of Kingsway West lying between Danesfort Avenue and Ascot Way.

The numbers of off-street parking spaces has been criticised. Residents feel this will get worse following a decision to demolish garages on Newbury Avenue.

The petition was prompted by an announcement that the Lincoln Court sheltered housing building would be expanded. In addition, the adjacent Windsor Hose site will become a centre of excellence for disabled children.

The principal route into both  these developments would be along Kingsway West and Ascot Way.

Campaigners have called for a service road access to be created from the adjacent Hob Moor Oaks school site where many of the disabled children spend their school hours.

The petition is being backed by local Councillor Andrew Waller.

The planning applications are expected to be considered by the Council at a Planning Sub Committee  meeting taking place on 6th December starting at 4:30pm