Spark, the operator of the shipping container “village” on Piccadilly, are to appeal against the Councils decision to require them to clad the front of the containers. Spark offered the cladding when they originally sought planning permission but later changed their minds and painted “street art” on some of the containers on the Piccadilly frontage.

In May they sought retrospective planning permission for the change, but this was turned down by the Planning Committee in August. They have now appealed against that decision with the Planning Inspectorate likely to take several months to take a view. It is understood that the Council has decided not to take enforcement action in the interim

The Piccadilly site is owned by the Council, which has spent around £60,000 installing services and subsiding improvements.

The company had originally claimed they could not afford the cladding, but they have now written to prominent Councillors saying that their tenants have taken “£1.2 million” since opening, “more than twice the original forecast”.

That may be good news for taxpayers, as the Council is set to get a share of the “profits” …..but there will be no share out before April 2019 at the earliest.

It has emerged that Sparks have not yet paid any rent. They have had beneficial occupation of the site since the beginning of September 2017.

The Council have been asked to confirm that Business Rate payments are up to date.

Spark have applied for planning permission to fit a “roof” on the site.

At the same time, they have announced that they will open for only 5 days a week (closing on Tuesday and Wednesday from later this month).

There are conflicting reports about the number of small businesses which are being sustained on the site. Some have not been able to make a go of the site, with one blaming the drink culture for scaring away family customers. 3 complaints about external noise levels have been received by the Council.

Spark however claims that, of the 21 letting units, all but two are taken: 9 food, 4 drink and 6 retail outlets. 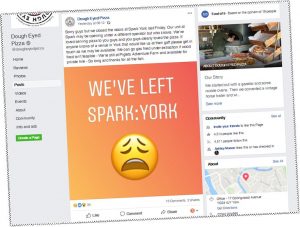 Depends whether you believe the spin, but clearly the alcohol-based units businesses got a summer boost from the World Cup and hot weather.

The lift, which will allow the village to meet disabled accessibility standards, will be operational this week according to Spark. They have, however, been unable to secure insurance which would indemnify the Council in the event of a business failure.

The approach taken by York Councillors, to the claims made before agreeing to lease the land to Spark, can still be viewed “on line”. The meeting which took place in November 2016 can be seen by clicking here Agenda Item 73