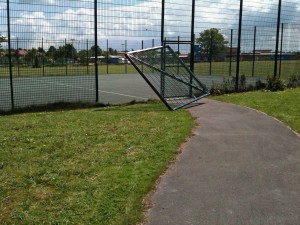 The MUGA is located off Kingsway West and was provided at the same time as the Hob Moor school was rebuilt in 2004. It was hailed as one of the community facilities that the PFI funded new build school would unlock. It proved to be the only causal use facility provided on the campus, with other facilities like the nursery later closing.

Initially the MUGA was to have been located within the school perimeter fence. It would have been secured by caretaking staff when not in use. Following pressure from the PFI contractors the MUGA became a stand-alone facility accessible outside school hours.

It satisfied the demand for “kick about” facilities to the east of Gale Lane.

Initially it was successful with detached youth workers staging events there. However, the then Labour controlled Council shredded the youth service following budget cuts in 2013. The organised use of the MUGA ceased. Calls for the Ward Committee to fund events there failed to get off the ground.

An experiment in leaving the area open resulted in arson damage to the all-weather surface which was never repaired. The service access gate was also damaged and not reinstated by the Council.

It is now little used and often strewn with litter and detritus. 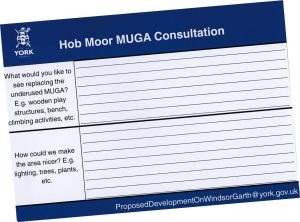 Yet there is still a demand for play and sports facilities for use by children in the area. The nearest alternative is the Energise (Better) sports centre on Cornlands Road which is run on a commercial basis.

Typically the cost of hiring an all weather pitch for a match is around £50.

Now officials are consulting on replacing the MUGA with other structures. They suggest wooden climbing frames, tree planting and better lighting.

There is a demand for better play facilities in the area but not at the expense of existing sports facilities.

We have already seen the Our Lady’s sports field developed and more recently plans have been approved to build on the football pitch at Lowfields. The Hob Moor school playing field will be reduced in size and an application to build on the Acomb Bowling Green is being considered by the Council.

Officials promised that, as part of the Lowfields scheme, pitches on Chesney’s Field would be levelled and upgraded. But the football season* has started without any sign of improvement.

The Council acknowledge that there is already a deficiency in sports and green space provision in the Westfield area. The Councils own Local Plan identifies the existing shortfalls as 4.98 ha of outdoor sports facilities, 6.02 ha of children’s play and 2.86 ha of young persons facilities.

Life expectancy in the Westfield ward is lower than in other parts of York. This is partly put down to unhealthy lifestyles.

Council run consultation exercises were discredited by the Lowfields fiasco. Rather than asking people to record a vote in favour or in opposition to multiple options, the exercise depended on narrative responses.

These were easy to manipulate by official’s intent on justifying a particular outcome.

This must not happen again.

There is a demand for “off the streets” activities for young people. Facilities like the MUGA – if well maintained and promoted – can make a difference. The plans for the new children’s centre on Ascot Way could also unlock the potential for better play facilities for younger children.

But all age groups need to be catered for.

*NB. The Beagle FC beat Cawood 4-0 in their Chesney Field encounter on Saturday 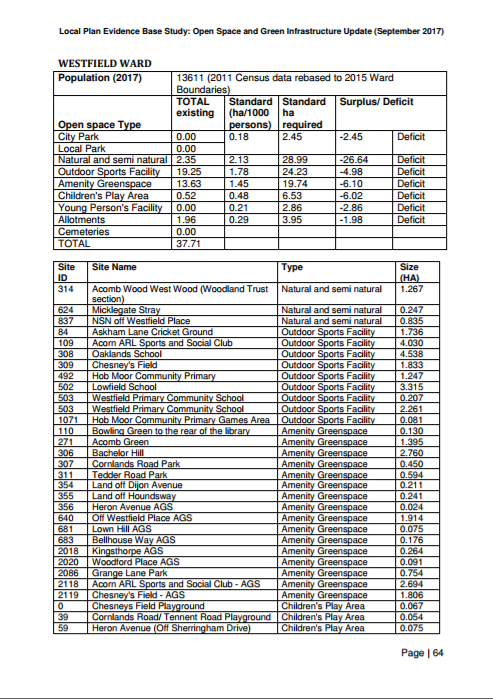