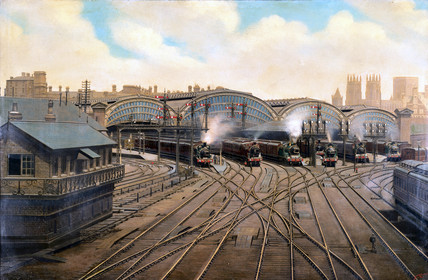 The railway station helped to transform the city when it was opened in 1877. At the time of opening it was the largest in the world and connected York to the wider world. It helped attract new businesses, create jobs and wealth for the region while opening up York’s heritage to more visitors from across the country and beyond.

Now the railway station and surrounding area are set to play just as big a part in the first half of the 21st Century. The station will play a key role connecting the city centre and surrounding communities with York Central – one of the largest city-centre regenerations in Europe.

Tours are available to book on:

The events are part of a four-week conversation about plans to transform the front of the station into a ‘fitting gateway to the city’. Under the proposals, the redundant Queen Street Bridge would be removed to create the space for the changes, which include:

To book free tickets for the tour visit https://www.eventbrite.co.uk/e/york-station-tour-tickets-46841980625

You can see all the proposals online at www.york.gov.uk/stationfront

Cllr Peter Dew, executive member for transport and planning, said: “York railway station has evolved several times over its lifetime, and we now want to bring it up to modern standards and ensure that it is equipped for the expected three-fold increase in passenger numbers over the next 30 years.

“Residents, businesses and visitors are vital in helping us shape what the station looks like in future and we want everyone to join the conversation.”

Cllr Keith Aspden, executive member for economic development and community engagement, said: “Transforming the front of York railway station will help to bring great economic benefits to the city along with York Central. It’s vital that residents and businesses join the conversation about what they want to see to ensure everyone benefits from this once in a generation opportunity.”