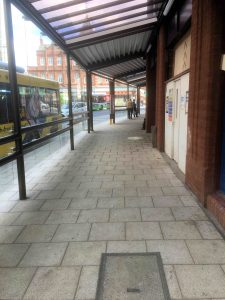 The York Council, as part of a “Clean Air Day”, is claiming that users of 75 cars could be accommodated on one double decker. Maybe so, but if they choose to wait at the new bus shelter on Rougier Street they will find that the real time information about bus services has disappeared.

Failure to roll out the electronic information screens to more stops has been a failing of the Council.

There are none at bus stops on Tadcaster Road which accommodate the, otherwise successful, inter city services.

Busy stops in the Acomb area have never had them.

They may be needed more and more as, following a good year in 2017 with high passenger numbers and record-breaking approval ratings in surveys, the service quality seems to be falling away again. This is mainly down to reliability with some buses being dropped without warning.

Back to the “Clean Air Day” and the Councils frankly disingenuous “on line” survey. The survey purports to ask residents whether they favour the use of lower emission buses on, and within, the inner ring road.

No prizes for the likely answer to that question. Might as well ask if residents would prefer have hemlock added to the  water supply!

Generally, air quality in York has improved in recent years with cleaner vehicles making their way onto the streets. York already has some electric buses operating on Park and Ride routes. This will reach 100% shortly following a government grant decision. 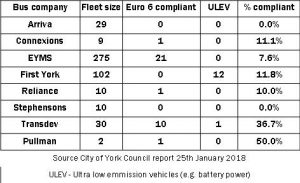 Having raised the possibility of access for only the least polluting buses by 2020, the Council singularly fails to tell residents how much a forced modernisation programme would cost and who would pay?

One of the questions implies that the change could mean a substantial increase in fares.

Another option for bus companies seeking to pay for the minimum £15,000 per bus cost of modifications to just exhaust systems, would be for them to withdraw services from less well used routes.

The Council can’t fund additional social bus services, so the consequence would be dozens, perhaps hundreds, of more cars on City streets.

Quite the reverse of what the Council hopes to achieve.

The Council needs a well thought through and costed modernisation programme for public transport in the City.  Sloganising simply clouds the decision making process.