The debt laden and controversial “Spark” container village has now applied for permission not to implement the site screening which was a condition of approval in 2017. 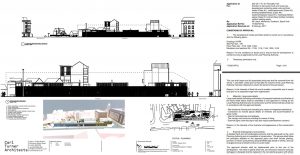 At that time, several objectors had described the old shipping containers as an eyesore. Most saw the plan as inappropriate for a sensitive City centre location and the expectation was that the site would be better developed on a permanent basis.

The site is owned by the York Council introducing a potential conflict of interest when consideration of the planning applications.

There was a strong view expressed that, if temporary planning permission was granted, then the buildings and scaffolding should be painted in a neutral colour.  This would minimise the impact that the development would have on the neighbourhood. 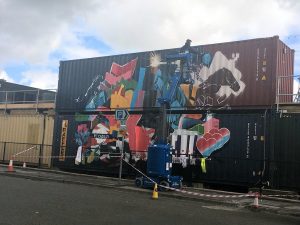 In the event, the developers surprised everyone by offering to clad the structure in wood panelling.

The Planning Committee can only judge and determine the plans that are placed before them. The cladding did mitigate some of the concerns about visual impact. The committee (wrongly in our view) then granted a temporary planning permission for 3 years.

It would be over a year before the permission was implemented with the developers ignoring several of the conditions including the needs of disabled users.

The containers haven’t been painted in a neutral colour. 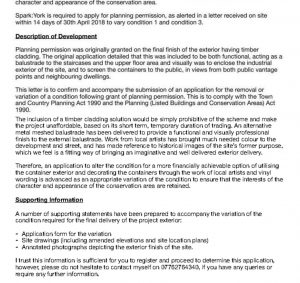 A quasi graffiti mortgage has been added to the Piccadilly frontage.

The York Council has been slow to take enforcement action on the planning contraventions. Not surprisingly other developers are crying “foul”. They say that special treatment arises out of the Council ownership conflict (over £50,000 of taxpayer’s money is currently at risk on the project). The remedy for that lies in enforcing the lease conditions for the land.

In the meantime, the media, social and otherwise, will once again no doubt be mobilised to support the change to the planning permission.

Hopefully the planning committee will develop a backbone and ensure that there is a level playing field for all who wish to trade in the City,