Two extra new apartments and replacement windows are among the enhancements to what is now a 57-unit temporary accommodation building in central York, for which the council has secured an additional £2.4m funding. 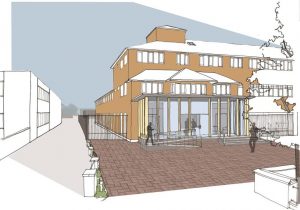 The updated plans have factored in conditions attached to a £2.365m grant from Homes England (HE). This funding adds to a £10.5m budget already agreed by the council for the purchase and redevelopment of James House on James Street, as well as costs associated with closing and relocating existing temporary accommodation for homeless households.

This extra funding means a saving of £500,000 to the council. Senior councillors are being asked to approve the revised budget for James House of £12.4m, financed by £2.451m from Homes England and £9.949m from the Housing Revenue Account.

The specification of the conversion has increased. Two additional flats will be created, making a total of 57, and some others will be increased in size to meet national requirements and the criteria of the HE grant. In addition, an access road will be built and windows on the scheme will be renewed with double glazing and improved sound insulation.

Following approval by senior councillors on 16 March 2017, James House on James Street was bought and planning permission was submitted in early November 2017.

The self-contained flats will be owned and managed by City of York Council. James Street consolidates into one building much of the temporary accommodation for homeless people currently scattered across the city. It will also replace the accommodation at Ordnance Lane.