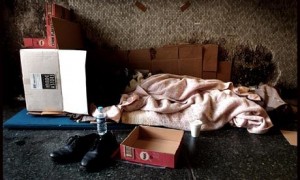 A proposal to give rough sleepers additional support off the streets and into safer, more stable lives will be made to senior councillors.

The recommendation will be to offer 16 emergency beds continuously to rough sleepers whatever the weather from 1 November to 28 February. Currently, under the national ‘severe weather scheme’ the beds are available only during these months when the weather is freezing or below.

Councillors will be asked to consider increasing the number of emergency beds in the city using £125,000 available over a three-year period to pilot an innovative scheme to meet the needs of the city.

In addition, the executive will be asked to allocate some of the agreed £20m housing investment fund over the next five years to build affordable one bedroom homes to help reduce homelessness among single people or couples.

The final suggestion is to recruit an officer to help individuals into private accommodation as well as acting as a contact for and offering support to landlords.

This is in addition to the existing 101-bed supported lodgings where rough sleepers are first accommodated. If they engage with support and education services, they are then allocated into the city’s 90 more independent accommodation units before, hopefully, supporting them into either private or affordable fully independent homes. Last year, we resettled 70 previously homeless people into permanent tenancies.

All known rough sleepers are routinely offered support and help into accommodation by the council and Salvation Army on the early morning walks undertaken several times a week. Everyone is offered a bed, even if it is just for one night. Sadly some persistently refuse any form of help, including mental health or substance misuse services.

However, rough sleeping has increased by 132% nationally since 2010 and the charity Crisis predicts there will be a 76% rise in rough sleeping nationally over the next decade. 29 rough sleepers were reported in York at the annual street count in November 2017, but during an informal street walk on 3 January 2018, nine were seen, others having been helped into accommodation or emergency beds.

At the end of September 2017 there were 58 households in temporary accommodation in York, 324 interventions having been made to prevent homelessness from April to September 2017. We are in the process of amalgamating all our temporary accommodation into a single scheme of 57 flats at James House which should be completed within 12 months. The planning application has been submitted and will be considered on 18 January 2018.