The York Council has announced today that the design, build, maintain and manage contract for York’s Community Stadium has finally been signed.

The announcement comes after another hitch delayed the contract completion from the promised October deadline.

The news marks a major milestone in the Community Stadium project and means that Greenwich Leisure Ltd will now formally take possession of the Monks Cross site and “diggers will be on site before Christmas”. In preparation for full construction works, site security and compounds will arrive on site within the next few weeks.

Greenwich Leisure Ltd will also take over the operation of Energise Leisure Centre and Yearsley Swimming Pool, as part of the wider new stadium and leisure contract, from 1 December 2017.

This news comes after last month, it was announced that Greenwich Leisure Ltd had appointed Buckingham Group Contracting Ltd as the new building contractor.

Once complete the new Community Stadium Leisure Complex will comprise of an 8,000 all-seat community sports stadium to host professional football and rugby league games. There will also be new leisure facilities incorporating a swimming pool, gym, dance studio, indoor and outdoor climbing facilities and a sports hall with spectator seating.

A commercial development on the stadium site will also feature a cinema complex, including an IMAX screen, five restaurants and up to three retail units. NHS outpatient services will be offered on site from a community hub and there will be a new Explore library and a York Against Cancer retail unit.

The new stadium, leisure facilities and the community hub will all open in 2019 along with the new cinema and commercial units.

The Community Stadium has had a chequed career since the Council, agreed to make land available for the project in 2010. Funding for the stadium was agreed then as part of a section 106 agreement with the developers of the adjacent Vanguard site.

Everything was on schedule for a 2014 opening when planning permission was granted in 2012 but the then Council opted for a much bigger project including the management of other leisure buildings in the city together with a new swimming pool and as substantial amount of commercial space.

That contract was held up by procurement regulations and at one point it seemed that the complex project would collapse. 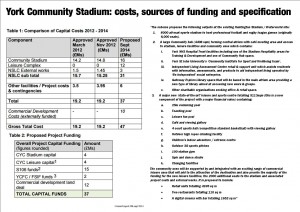 .The following statement has been issued by the Councils Liberal Democrat Group

New Community Stadium gets the green light to begin on-site

The contracts to build York’s new stadium and leisure complex were signed-off last night at a meeting between involved parties.  This means development of the 8,000 all-seat Community Stadium, and accompanying leisure facilities, will begin before Christmas.

This sets a significant landmark in the Community Stadium project; a project that the Liberal Democrats has seen through from the very beginning.  Greenwich Leisure Ltd will now formally take possession of the Monks Cross site and construction equipment will arrive on site within the next few weeks. It has also been confirmed that Greenwich Leisure Ltd will also take over the management of Energise Leisure Centre and Yearsley Swimming Pool.

“I am delighted that the contracts have finally been signed and construction can begin shortly.  The Liberal Democrats have continuously pushed to get this project off the ground, right from the word ‘go.’

The new stadium and accompanying facilities will provide a wide-range of bespoke facilities for the residents of York to enjoy for years to come.

Furthermore, today’s agreements also see the future of Yearsley and Energise secured as part of the wider project and this will only continue to benefit residents across the city.”

“This has been a Liberal Democrat project from the outset and I am happy to see the past 8 years of work culminate in today’s announcement.  I very much look forward to working with partners in delivering this project and as York City fan, see the residents of York attend their new home ground.”