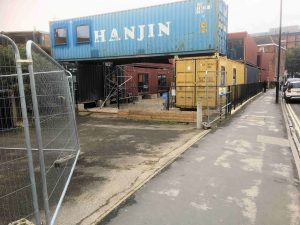 The operators of the proposed shipping container village on Piccadilly have now confirmed that there will be a delay in completing the project.

As we reported earlier in the week,  there is still a substantial amount of work to be finished on the site.

The developers say it will now be “early Spring” before the units are occupied. The economics of the project rely heavily on booze and street food outlets.

It is unclear when the Council – which is funding some of the upfront costs – will begin to recover their investment.

The Council is spending £40,000 connecting utility services to the site.

When approving the use of the site 12 months ago, the Council said it expected to recover its investment from rent payments.  Whether they will now be able to achieve that before the initial lease runs out in 2019 remains to be seen.

Sadly, the site is now even more of an eyesore than it used to be.