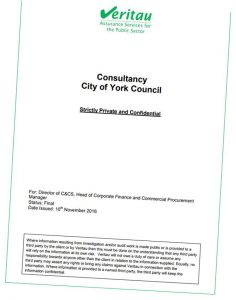 Councillors from all parties have written to the York Council Leader (David Carr) asking him to reveal the contents of a secret report compiled by the Local Government Association (LGA).

The report looked into the behaviour of some York Councillors and officials at a stormy meeting of the Audit and Governance Committee which took place on 22nd February.

The report is thought to criticise the way that Council officials handled the meeting when it was considering a report on the appointment of consultants by the previous Labour administration.

An internal report had revealed that around £174,000 had been spent when appointing consultants outside the Councils procurement regulations i.e competitive tenders for the work had not been obtained.

Councillors voted to discuss the issue in public, prompting the then chair of the committee to walk out followed by another Labour Councillor.

Subsequently an investigation into the meeting was conducted by the LGA. The expectation was that the further report would have been presented to the last meeting of the Audit committee but the Council Leader intervened to prevent its publication.

Cllr Carr has so far refused to publish the report, despite promising members at a full council meeting in July that he would.

In the letter the councillors say:

“As members of City of York Council and its Audit and Governance Committee, we are writing openly to you to express our concerns over the lack of openness and transparency with the above report. 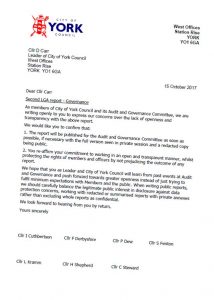 We hope that you as Leader and City of York Council will learn from past events at Audit and Governance and push forward towards greater openness instead of just trying to fulfil minimum expectations with Members and the public. When writing public reports, we should carefully balance the legitimate public interest in disclosure against data protection concerns, working with redacted or summarised reports with private annexes rather than excluding whole reports as confidential.”

It is highly unusual for members of all the political  Groups represented on the Council to jointly produce such a letter.

It places further pressure on a Council Leader who has been increasingly isolated since he took unilateral action to sack two leading LibDem Councillors from the coalition Executive at the beginning of September.

The Council’s Standards Board has since made little progress in dealing with the allegations – also understood to be related to the procurement report – against the two Councillors.

Some sources within the Council are now saying that – unless progress on the reports is made quickly – an ultimatum is likely to be issued.

Either Cllr Carr goes or the coalition collapses.