Many residents living in the Lowfields area were surprised to get a letter last week from the Councils Housing Directorate. The letter told them that two planning applications had been submitted which would lead to the development of the whole of the Lowfields site. 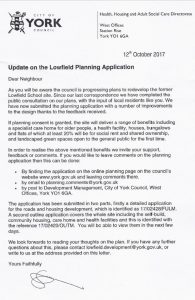 It turns out that someone jumped the gun as these applications still do not appear on the “planning on line” web site  https://planningaccess.york.gov.uk/online-applications//

The letter claims that there have been changes made following the last consultation with residents in the summer. The Council fails to highlight what these changes are.

The housing department also claims that “landscaped green space will be open to the public for the first time” In practice the playing fields were open to the public until about 5 years ago when the Council tried to secure the boundaries. At the time, they said this could only be a for a few months.

The usable green space, on the plans that have been published so far, show an area of useable amenity land which is similar in size to the small area which lies at the junction of Dijon Avenue and Lowfield Drive.

The Council has blundered if it is canvassing for support – at taxpayers’ expense – for a scheme which is subject to a planning application. There is a long-standing protocol that, where a local authority is both the landowner and the planning authority, then it must behave in an impartial way. That principle has been breached already. It is likely to increase the pressure for the proposal to be called in by central government for determination.

Perhaps even more extraordinary, was a claim made by the Tory Councillor responsible for housing on Friday who said that the houses would be built by the Council. It would be the “biggest housing development by the Council since 1988”

It emerged today that no such decision has been taken.

Indeed, with only 20% of the properties likely to be affordable, there would be little incentive for the Council to take on the burden of appointing professional staff to project manage what would only be a 3-year project.

Private house builders have been subject to the 20% rule for over a decade and could produce homes more quickly and economically.