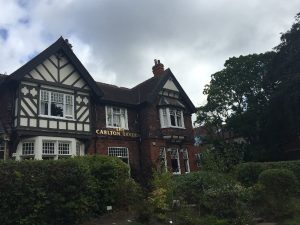 An interesting piece below from the York Civic Trust.

However it is too late to register any objection on the Planning web site as the committee report and recommendations have already been written and published. Objectors have three courses of action available to them

Another big local planning application has been registered by the Council concerning building on the Lowfields playing fields.

It is likely to be “live” on the Councils planning web site shortly https://planningaccess.york.gov.uk/online-applications//

This plan, which would rob the Westfield area of another green space, is being opposed by a well organised “Save Lowfields Green Action Group” who are likely ask the Minister to “call the application in”.

On The Tavern proposal the Civic Trust say,

This is the last week to submit objections to City of York Council to the planning application to demolish West Garth, an 1883 Neo-Tudor villa and in recent years the Carlton Tavern, and replace it with a 72 room, 4-storey private care home.

York Civic Trust have objected to the scheme. Read the objection letter here.

The planning committee’s site visit is at 10.55am on Tuesday 17th October next week and the public are welcome to attend.
Trust members may be interested to read more about the history of the house:

West Garth tells us so much about the development of this affluent York suburb of Holgate where York’s civic leaders built their Victorian and Edwardian villas just outside the city walls. The first owner was Lieut. Col. Arthur H. Russell and his family. A leading figure in the city in the 1880s, he was a solicitor, founder and Vice President of York Conservative Society, and President of York Law society.

Related to John Russell RA, a leading portrait painter of his day, Arthur was also a Sheriff of York. West Garth continued to be a desirable property in the 1930s lived in by Edmund Birks, also a Sheriff of York and magistrate of the North Riding at that time. The house was later bought in 1946 by a Sheffield philanthropist, Godfrey Walker and his wife, and dedicated by the Archibishop of York, as a home for ‘waifs and strays’. Following a fundraising appeal in 1967, led by the then Archbishop of York Donald Coggan, it became a nursery and was purchased by Marstons.

West Garth has been attributed by local heritage experts to celebrated York architect Walter Green Penty, whose firm Penty & Penty designed Elmbank on The Mount and Tudoresque Aldersyde on Tadcaster Road, as well as buildings in Hampstead Garden Suburbs.

Both of these significant York houses were commissioned for the Leetham family by Russell’s neighbour, Alfred Leetham, of Leetham’s Hungate Flour Mills, also designed by Penty and now demolished. The Penty and Leetham family were linked by marriage, and Alfred’s home, Shelley House, also attributed to Penty, stood right next door to West Garth.

Residents refer to it as a ‘mirror-image’ and the pair were described by Pevsner in his Buildings of England as “two large 1880s gabled villas, tile-hung and half-timbered”. Shelley House was demolished in 2002. The Carlton Tavern is now the last example of this style of villa, and potentially of Penty’s work, on the main thoroughfare from The Mount to the western suburbs of York.

It is not just national and local heritage experts, from York Civic Trust, and York Conservation Trust, to the Victorian Society, SAVE Britain’s Heritage and the Council for British Archaeology, that think the Carlton should be saved. It’s part of the shared history of Acomb and Holgate. A campaign led by local residents is gathering objections to ensure this last example of ‘Tudoresque’ Victorian architecture survives for generations to come”.