Plans for an accessible, traffic-free route connecting the station to the city centre could move a step closer next week.

Senior Councillors will consider the response to the recent public consultation over plans for a wider, step-free footbridge adjacent  to Scarborough Bridge at their Executive meeting next week.

Ramps at both sides of the proposed footbridge would mean people in wheelchairs and pushing prams will be able to use the bridge, and cyclists would no longer have to push or carry their bikes up the steep narrow steps.

Widening the bridge from 1.3m to 3.7m would also make for a far more comfortable crossing for the 2,600 pedestrians and 600 cyclists who use it daily.

The consultation carried out in July included a two-day public exhibit in York Station. Of the 142 individual responses, 135 were supportive with only 2 objections.

These positive posponses reinforced the council’s understanding of the issues with the existing bridge, and revealed a strong preference for new steps on the outside of the bridge to avoid the potential ‘pinch-point’ as people joined the bridge deck from the steps.

The new bridge could be in use by January 2019, subject to planning permission and securing funding for the estimated £4.9m costs (!)

The council intends to fund the bridge form multiple sources, including its own capital and local transport funds, the West Yorkshire CityConnect scheme and the York, North Yorkshire and East Riding Local Enterprise Partnership.

The new bridge will do little to improve connectivity into the new York Central site. The original intention had been to install a bridge which would span the east cost main line eliminating “pinch point caused by the bleak Leeman Road tunnel and the river. That idea now seems to have been abandoned. 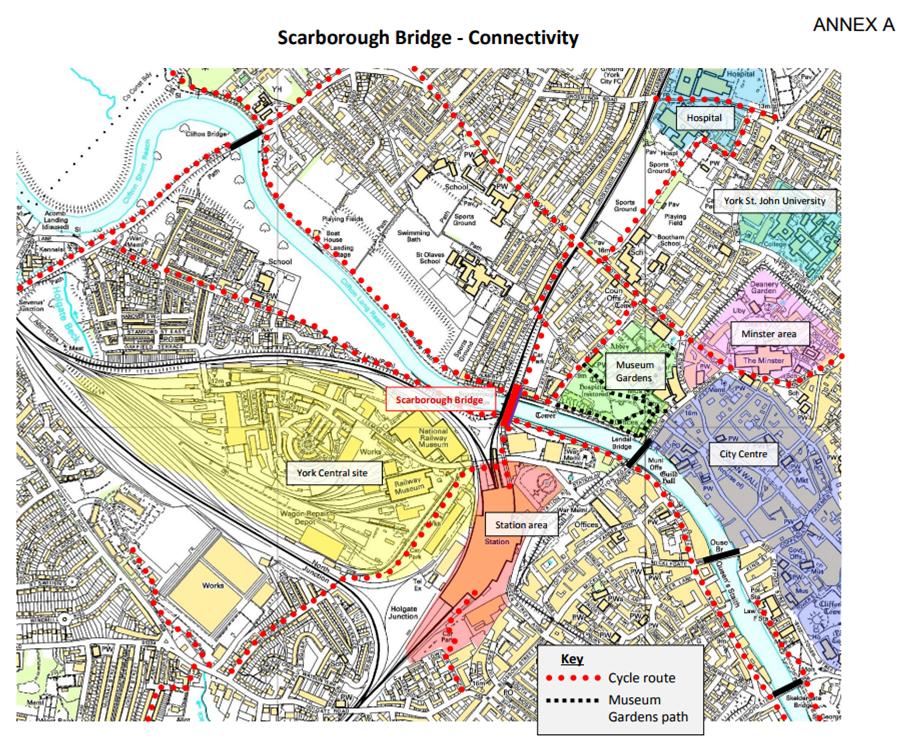 “It is really important that we open up what would be a fantastic, traffic-free journey from the station to museum gardens and the city beyond for everyone to enjoy.

“The consultation tells us that the problems with the current bridge definitely need addressing, and that we’re heading in the right direction with this scheme.

“I’d like to thank everyone for taking part in the consultation. It is really important that we can listen to as many voices as possible to help us make the right decisions for everyone in York.”