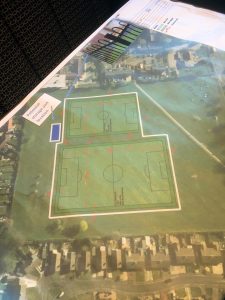 Last nights “drop in” briefing, at which some residents were given the opportunity to see how Council officials want to see Chesney’s Field developed, produced more questions than answers.

The plan to fence off part of the popular piece of public open space had already got off to a poor start when it was found that neither local Ward Councillors not the Residents Association had been consulted.

It now appears that flyers advertising the exhibition were only delivered to a small number of properties. Attendance at the event was modest.

The Residents Association will be organising another meeting in August to review the proposals.

What is now clear is that the plans involve over 60% of the field being enclosed with 1 metre high railings. This is intended to accommodate the preferences of a football club (Woodthorpe Wanderers) which faces eviction from the Council owned pitches at Lowfields.

A shipping container storage type building may also be left on the field and some levelling work would be undertaken. The playground is unlikely to be affected.

Although officials say that access gates would remain unlocked, the fencing would effectively eliminate some types of sporting activity, such as cricket, and could inhibit other uses.  Activities would tend to concentrate around the perimeter, nearer to peoples homes.

There is an option to include an “outdoor gym” or “trim track” (the Acorn field or Foxwood Park remain other location possibilities for these). 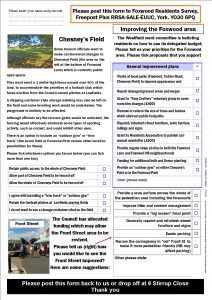 The Council says that – to make up for the loss of the playing fields at Lowfields which the Council hopes to build on – additional open space will be provided near the college on Tadcaster Road (over a mile from the existing pitches). Perhaps not surprisingly, the existing users of the Lowfields pitches feel that this is too far away to meet their needs (and is unlikely to address the concerns of playing field conservation bodies both local and national).

The £40,000 expenditure will be mainly used at Tadcaster Road.

Local Councillors will be consulting directly through a door to door survey over the next 3 weeks. Around 1000 homes will be visited.  Residents will then be able to give their verdict on whether they want to see any changes to the field.

Early responses to the survey suggest that most people would prefer the football club to stay at Lowfields.

One option would be for the Woodthorpe Wanderers football club to play on Chesneys Field – with the benefit of levelled pitches – but without any fencing.

As the concern seems to relate to the possible fouling of the pitches by dogs, additional poop scoop bins could be provided together with more warning signs. We think this will probably meet most peoples concerns. Any storage unit could be located more discretely behind the landscaping mound on the other side of Foxwood Lane

Residents are also being given the chance in the survey to say whether they want a fitness tract and/or outdoor gym.

The survey can also be completed “on line” click

The results are expected at the end of August