Tory Councillor Sam Lisle has praised controversial plans to build on the playing fields at Lowfields.

The revised plans see still more of the green field being built on with the nominal “village green” reduced in size to the equivalent of the grassed area on Dijon Avenue. 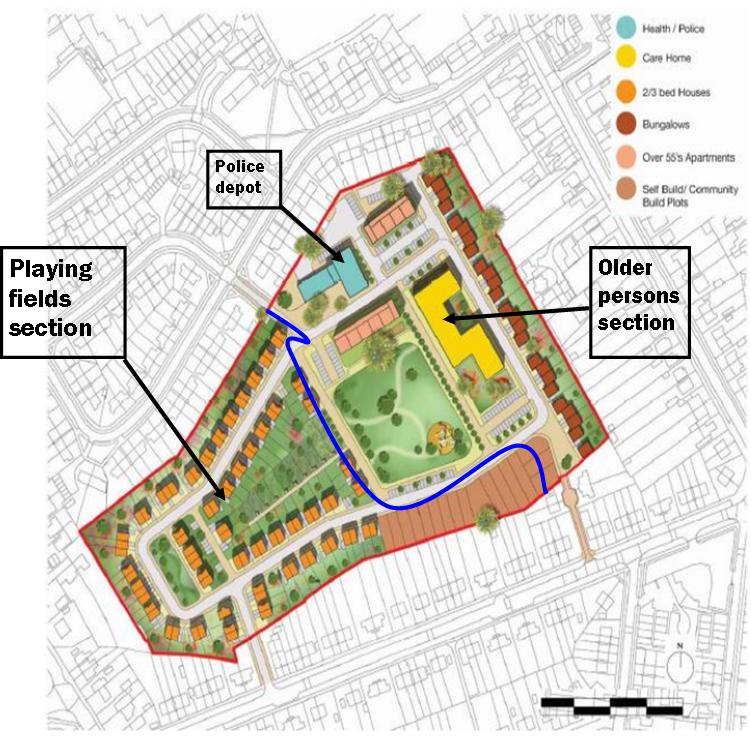 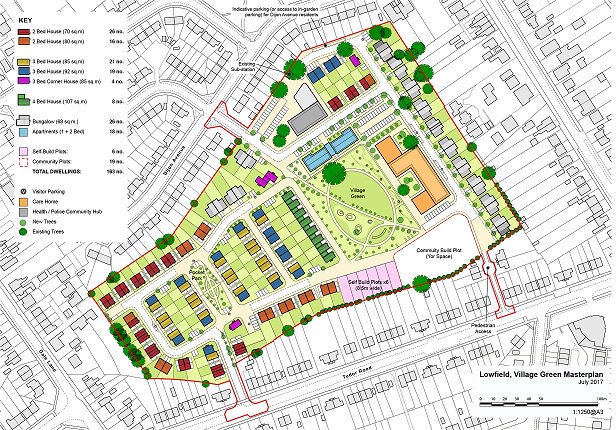 He did so on the day that the Council confirmed its plans for an exhibition of the proposals which could see nearly 200 homes (including the rooms in the care home) crammed into the small site. It also revealed that any additional homes built on brownfield former Ministry of Defence land will not be used to offset the pressure to build on green fields like Lowfields.

The Lowfields plans also include relatively uncontroversial proposals for an elderly persons care home and bungalows on the east of the site (on the built footprint of the former school).

The school finally moved its activities from the Lowfield sports field in 2010 although usage by sports teams continues to this day.

The Council says the site, to be known as Lowfield Green, is at the pre-planning stage.

“Suggestions are now invited and comments can be submitted on plans for older people’s accommodation, housing, a health hub and public open space. The latest plans follow on from previous public engagement in October 2016.

The drop-in event this month will be held at the Gateway Centre, Front Street, Acomb YO24 3BZ on Tuesday 18 July from 4:30 – 7pm and is open to all. Invitations have been sent to the immediate neighbours of the site.

At the drop-in event people can see and discuss the plans with officers and learn more about changes to the plans since the last event. Once comments are reviewed and final plans drawn up, the council will submit a planning application this summer.

The proposals for the site include:

The Council are coy about a plan to provide a police station on the site. This would have meant the closure of the police depot on York Road and is controversial (although currently located outside the playing field part of the site). Similar unanswered questions remain about the Council ‘s paln to estbalsih a “health centre” on the site with no funding having been allocated for such a function by the NHS.

The Council says that “anyone unable to go to that event can see the plans at a display at Explore Acomb Learning Library Centre, Front Street, Acomb YO24 3BZ from 18 to 28 July 2017, or they can be viewed and commented on at www.york.gov.uk/consultations. (NB. There are no plans on the Councils web site at present)

Councillor Sam Lisle, Tory executive member for housing and safer neighbourhoods, said: “We need new homes in York and the Lowfield Green site gives us the opportunity to demonstrate what a good quality, mixed use development can look like.

“I urge residents to take a look at the plans for the care scheme and bungalows for older residents and have their say in order to shape our proposals going forward.”