Architects have submitted revised plans for the shipping container development scheduled to be constructed on the former Reynard’s garage site on Piccadilly.

There will now be no outdoor music played according to the developers.

The changes come at a time when several organisations – which originally supported the concept of a “start-up” orientated small business hub –  are changing their line.

The York Civic Trust in its latest representation questions how quickly a permanent use can be established for the Reynard’s site and expresses concerns about the bar/restaurant domination of the development.

Even “Make it York”  now question the number of food and drink venues that the site will accommodate.

They say, “as things have developed, the emphasis seems to be more and more on ‘street food’ and entertainment. Indeed, the York Press now refer to it as the “street food hub.”

This is concerning to us. Make It York has just invested a significant amount of money in the Shambles market area, creating a street food hub. This has been an important move as we seek to bring some life back to the Market area, a space that CYC have leased to us to develop. 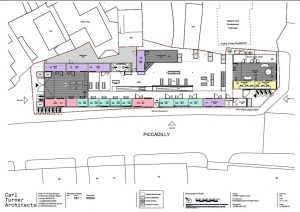 I cannot believe that the Council wants to regenerate one area of the city only for it to have a detrimental effect on another. That wouldn’t feel very ‘joined up’.

Figures I have seen suggest that nearly 80% of the space is going to be for food and retail and this seems at odds with it being a space for ‘start up’ businesses”.

We already have evidence that some of the street food traders in our space have been approached to go on to the Reynard’s site”.

The Council’s own Public Protection Unit has also objected to the plan on noise grounds.

Referring to noise originated by people standing and sitting in the outdoor areas during the  evening, they say, “the changes in noise level are most likely to be noticeable, particularly as people noise is not constant in volume and will include regular peak events associated with shouting etc.

Because of this I do have significant concerns about the noise impact from people, particularly as there are not really any noise mitigation measures which could be used to reduce any impact and I would, therefore, have to recommend refusal due to the potential for adverse impact due to noise”.

The revisions to the plans mainly affect the east of the development but they are unlikely to address the concerns of residents living in that area.

The changes listed by the architects include:

Their full statement can be read by clicking here

So, there seems to be a belated realisation that the scheme is in the wrong place, would cause nuisance to neighbouring residents, is in breach of the Councils policy of controlling alcohol related activities in vulnerable streets and could damage existing street food businesses.

It is also still visually intrusive and could delay the permanent redevelopment of a key site in the City.

Residents have until 18th April to comment on the revised proposals.