The NHS have withdrawn a suggestion that a replacement hospital for Bootham Park should be built on the former Lowfields school site.

The proposal brought a strong reaction from local residents who pointed out that access to Lowfields was only available through a tightly populated residential area. Increased traffic – potentially 24/7 – would have had an adverse effect on the local environment.

In a poll conducted by local LibDem Councillors in July, 57% rejected the idea. Many pointed out that City centre sites offered much better transport links for both staff and patients. Residents favoured the provision of accommodation aimed  at older people on the footprint of the former secondary school. 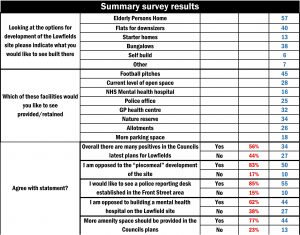 Now we understand that the Tees, Esk and Wear Valleys NHS Foundation Trust are focusing their hospital search on three locations. They  are the existing Bootham Park Hospital site, a site near Clifton Park Hospital off Shipton Road, and the former Vickers and Bio-Rad factory site in Haxby Road.

The Councils formal consultation on the future of the Lowfields school site is due to commence in October.

It is likely that there will be an exhibition  of proposals at the Acomb Library. before a decision is taken by the Council’s Executive on 8th December.

Many residents also took the opportunity to object to the Council’s plans to build on the Lowfields sports fields when responding to the recent consultation on the Local Plan.

They pointed out that building on football pitches was contrary to national policies and would leave minimal amounts of green space in the nearby estates.