There are only a few days left for residents, businesses, developers and landowners to help shape one of the most important strategies of our generation, by having their say on the Local Plan sites consultation. 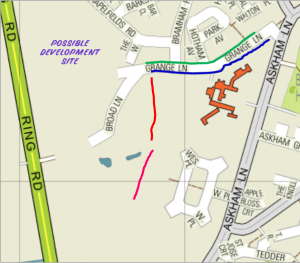 Developers are eyeing land at the end of Grange Lane

City of York Council is currently preparing York’s Local Plan, which will support the city’s economic growth, protect York’s green belt, address the shortage of housing and help shape future development and employment in York over the next 15-years and beyond.

On the west of the City there are a number of controversial proposals notably the plan to build on the playing fields at the former Lowfields school site.

Residents don’t, of course, know what alternative proposals developers are suggesting although one – development  of the land a the end of Grange Lane – has become public. 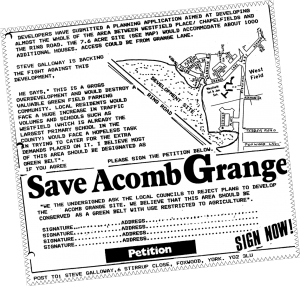 Ironically it is almost exactly 28 years to the day since a proposal to develop land near Askham Grange was first mooted.

At that time, local Councillors were able to successfully fight off the threat and the land has remained in the Green Belt ever since.

The eight-week consultation finishes on Monday 12 September at 5pm on the Local Plan Preferred Sites document, which outlines revised figures for housing, employment and sites.

Go online:  http://tinyurl.com/LPGrange to complete the survey and to find a full copy of the Local Plan Preferred Sites document

3 thoughts on “Last chance to have your say on York’s future housing, jobs and growth”