It seems that some still yearn for the world of 60 years ago.  They would do well to remember that the 50’s and 60’s were unsettled times with two super powers playing a deadly game of roulette with nuclear weapon threats while right wing politicians like Enoch Powel stirred up racial hatred.

Since then a lot has changed. You can sit in your front room and scour the internet for instructions on how to make bombs, get guns and buy knives. After a period of relative calm, conflict continues in the Middle East and terrorists of all persuasions appear on our doorsteps. 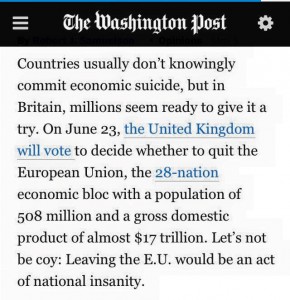 Against that, we are more prosperous. Quality of life – for most people – has improved hugely over the last 50 years. In York, unemployment has been below the regional and national average for three decades. Tourism, higher education, technology and financial services are now the City’s core employers.  All need stability and a predictable market to continue to prosper.

One of the most frequent criticisms of the European Community is that is ponderous. Many with have been frustrated by the time taken to negotiate large contracts caught up in the vagaries of OJEC advertising.

But that is also the strongest argument for remaining in the EC. If people are talking then they are not throwing bottles, shooting bullets or launching missiles.

Britain leaving the EU could fuel a rise in extreme nationalism across the world. There are signs of that already in other mature democracies including the States. That is a chilling prospect for those who remember the days of confrontation half a century ago.

So a vote to REMAIN in the EU is a positive vote.

…..& those of us who want to see change to the rules of the European club will continue to use our democratic vote when the next elections come along in 2019