It looks like the Council will be going into partnership with the private sector in an attempt to optimise use of its City centre car parks.

The car parking efforts of the Council have been criticised in recent years with several including the popular Castle Car Park needing resurfacing. 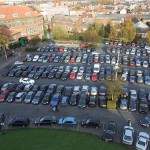 Charges nearly doubled for residents  during the  four years when Labour were in office  although a price freeze for 2016 was recently announced.

A candid report, being considered at a meeting on 11th February, admits that the Council lacked the expertise to operate the “pay on foot” trial at the Marygate car park. The trial was forced on the Council by some commercial interests and might have had a better chance of success had the equipment been installed under cover at the Fossgate shoppers car park.

The Marygate trial was heavily criticised by taxpayers as the barriers and other equipment frequently failed costing over £50,000 in lost revenue.

Despite this, officials are recommending that the trial be continued.

Extension of “pay on foot” to other car parks would be one of the objectives listed for a new “joint venture company” which would see the Council link up with a professional car park company.

If approved, it would mean yet another Quango running a key public service in the City.

Several other options for the future management of the car parks are listed. They include selling off, what has been a cash cow for taxpayers, to the private sector although this is discounted as it would remove the Councils ability to influence traffic patterns and Park and Ride use.

The Council says that it hopes some existing privately run car parks can be incorporated into the new contract.