Car park charges look set to be frozen across York to “help local businesses bounce back after the Boxing Day floods”.

Leaders of the Conservative-Liberal Democrat Executive have announced plans to freeze charges in council-run car parks as part of next month’s 2016/17 Budget.

This means prices will be unchanged for the next 12 months at car parks including Castle, Foss Bank, Marygate, Monk Bar, Piccadilly, and St George’s Field. 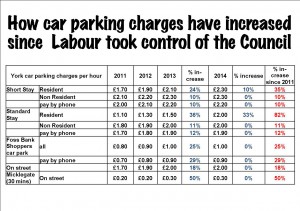 The freeze will be  the first since the Council was led by the LibDems in the period up to 2011.

Car parking charges were held in check by that administration for a record seven years.

When Labour came to power, they introduced large increases. Over their four years in office, some charges nearly doubled.

In the end, the law of diminishing returns meant that the Councils parking income actually fell.

Although the freeze is likely to be generally welcomed, it fails to address immediate concerns.

We suggested a few days ago that the Council should reduce the charges at its Foss Bank “shoppers” car park at least until the end of March.

Unfortunately this idea has not been followed up.

Instead the City of York Council has confirmed that it will contribute £50,000 to a new UK-wide campaign to promote York. Tourism bosses in the city say this will be their biggest ever marketing campaign as work continues to promote York following the floods.

“The is part of a range of measures to help York businesses bounce back from the recent flooding. We need to get the message out that York is open for business and do all we can to encourage people locally and nationally to visit the city. Freezing parking charges for the next 12 months and investing more in promoting the city will help to do this. We want York to be on everyone’s to do list in 2016.”

Executive takes place on 11th February and the full 2016/17 budget papers will be published the week before. Final approval will be decided at Budget Council on Thursday 25th February. More information on the city’s car parks and current prices can be found here: https://www.york.gov.uk/carparks