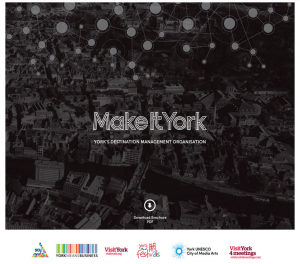 Rather awkwardly for York’s least favourite QUANGO, “Make it York” will have to face a meeting of its Shareholder’s Committee on 18th January.

The Shareholders Committee has so far failed to get to grips with the fact that the, wholly Council owned, organisation was launched without any meaningful performance indicators being agreed.

Those that there are, rely heavily on – largely opaque – economic development stats and “Visit York” tourist numbers.

Many of the statistics, due to be reported to the meeting, are missing anyway.

It remains to be seen what the, so far largely sycophantic, Councillors on the committee make of the organisations failure to support business on the 26th and 27th of December when severe floods hit parts of the retail area.

Those looking to the Make it York website for information would have been disappointed.

It was to be a week before the organisation began to raise its head above the flood waters.

It is also the first meeting since the organisation broke its promise to provide a replacement attraction for the traditional Christmas carousel that they evicted from Parliament Street during the St. Nicholas Fair.

It was, however, good news for drinkers, of course, as a bar in a tent appeared on Parliament Street.

With the Councils budget meetings coming up shortly and money tight, the Make it York grant seems to offer a risk free economy.  As a minimum the governance and management arrangements for the organisation need a major rethink.