The Theatre Royal will not reopen until 22nd April.

That means it will have been closed for 47 instead of 27 weeks during its current restoration. 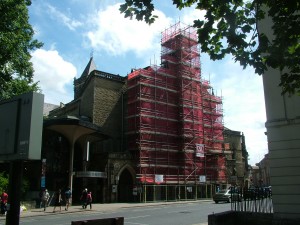 The delay has been caused by the unexpected discovery of archaeology remains including the foundations of the St. Leonards Hospital. Asbestos was also discovered in the back wall of the stalls.

The additional cost of the building works is put at £1/4 million but to this must be added an estimated loss in income of £500,000.

Origonally the restoration had been expected to cost £4.1 million.

The Theatre is hoping to persuade the Arts Council to help to make up the deficit although some subsidy from the York Council is also likely.

The news is a major blow to the Theatre which is one of the gems in York’s cultural crown. It does much to promote the City around the world with the recent “in Fog and Falling Snow” production featuring in a TV documentary only last month.  The cast was mainly made up of York residents.

The adaptation for the stage of the Railway Children had its genesis in York. It is currently still running in London at the Kings Cross theatre.