North Yorkshire Police, City of York Council and the York Retail Forum have joined forces to warn delivery drivers of the dangers that can be caused from driving and parking inappropriately in York’s city centre.

The new campaign follows a call for action from retailers and businesses after two incidents took place within a matter of weeks of each other, which saw historic buildings damaged by large delivery wagons, partly due to obstruction on the footstreets by other vehicles.

Yesterday the “Make it York” organisation – which is now responsible for “managing” the city centre  – was criticised for proposing further restrictions on delivery times in Davygate which could make congestion worse.  Parking arrangements in Kings Square had also been criticised.

Backed by the Retail Forum and Make It York, the new campaign issues a warning to delivery drivers to be careful and considerate of pedestrians, businesses and other vehicles.

If not, they could be fined.

North Yorkshire Police and the council already work side-by-side to monitor and take action against those who flout the law, but are stepping up enforcement action to increase safety in the city centre in the busy lead up to Christmas.

From December, drivers which are caught breaking the rules will be given a warning style ‘ticket’ [artwork attached] which will act as an advance warning. Should drivers re-offend they could be given a real Penalty Charge Notice by North Yorkshire Police or the council.

The campaign asks retailers and businesses to sign up to five key aims: 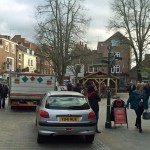 Cllr Ian Gillies, Executive Member for Transport and Planning, said: “We’ve listened to businesses and residents and agree that we can do more to help make our city centre safer.

“We simply can’t have a repeat of the lorries driving into shops on Stonegate and Coney Street, damaging our historic buildings and causing thousands of pounds worth of damage to businesses through loss of income and repairs. In the busy lead up to Christmas we want to attract shoppers to our city centre, not make it less inviting with vehicles obstructing the footpaths and the roads.”

Inspector Andy Godfrey, of York Police, said: “This campaign is about educating delivery drivers, making sure they understand that inconsiderate and inappropriate parking in York city centre puts pedestrians, motorists and businesses at risk.

“We will be working in partnership with City of York Council to monitor and take action against those who continue to ignore our warnings, ensuring our city centre is safe for everyone, particularly during the busy Christmas period.”

Chris Price, City Centre and Markets Manager, Make It York, said, ‘Getting deliveries to our retailers on time is crucial.  However, we must do all we can to help ensure deliveries are efficient and without risk to York’s beautiful historic buildings and ensuring public safety at all times.’

Frank Wood, Chair of the Retail Forum, said: “Whilst it is essential to have delivery vehicles in the city centre at certain times, to service the businesses, it is also vital that these delivery trucks vacate the city immediately their deliveries have been completed. Some delivery and private vehicles are abusing the current restrictions by parking on the pavements and double yellow lines, with some drivers leaving their vehicle in situ after they have finished unloading and loading.