The York Council has gone ahead and launched a replacement for the “report it” system which it abandoned 3 years ago. The older system had worked well for over 8 years but was, apparently, a victim of the move to West Offices. 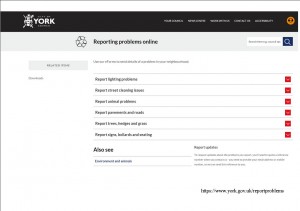 A Smarter York “App” was introduced but it lacked the functionality and flexibility of the old system. It gradually fell into disuse.

About 2 years ago the Council promised a system based on individual “customer accounts” and this was to have been launched in the spring.

Now the Council has rushed out a minimalist reporting system for neighbourhood reports. It is intended to cover issues like  street light faults, cleansing issues, footpath fouling, road/pavement defects, overgrown trees and problems with street furniture.

Unfortunately the system has not been properly tested with users and already a list of “bugs” has emerged.

These issues need to be resolved before the system is promoted by the Council. In the meantime, “Fix My Street” offers users much greater functionality and reassurance.