Today sees the York Council take a faltering step back towards the kind of all party consideration of proposals not seen since 2008, when the Executive Advisory system was scrapped.

An all party meeting will consider whether to relax an agreement with the York Museums Trust (YMT) which gives Yorkcard holders free access to their galleries. 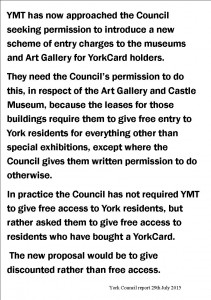 As we said, when the report was published, we believe that important background information has been omitted from the report. Not least this would include estimates of the numbers of customers who might be effected by any changed arrangements together with the business plan assumptions being made by the Trust.

However this may simply reflect the dangers of outsourcing public services to quasi independent trusts and social enterprise bodies. Such bodies are able to source additional funding streams but transparency suffers. These may be similar problems with the arrangements now in place for the management of the libraries and economic development in the City (Make it York).

At the moment, the YMT provides an annual report to the Council and is subject to public questioning about their performance and plans. The last session took place on 22nd June

Today the proposal is that the Council clarify with the YMT that they can charge a discounted admission price to YorkCard holders. This would not require an amendment to the lease of the museum buildings (and consequently is not a “key” decision in Council terms). Any decision on charging levels would effectively be made by the YMT.

If the Council committee recommends that an estimated additional £400,000 subsidy be provided to “buy off” the charging plans (by reinstating historic levels of financial support) the Executive member does not have the powers to endorse such a proposal. It would become a “key” decision requiring a budget amendment and would have to be referred, via the Councils Executive, to the next full Council meeting (on 8th October).

Whether the YMT could sustain its operations in the interim might be a matter of conjecture. The new Art Gallery is due to open at the weekend. They would no doubt point out that 9 months had elapsed between the (then Labour controlled) Council making a decision to cut the subsidy and the Council addressing the consequences of its actions.

NB. When the Art Gallery was under direct Council control (until the middle of the last decade) an entry charge was levied. Admission numbers were low.