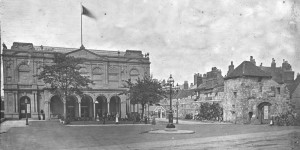 The first “open” decision being taken,  involving cross party debate, by the new Council, addresses the issue of charging residents who want to visit the Art Gallery and Museums in the City. The meeting on 29th July, is open to the public and there is an opportunity for residents to make representations.

Unfortunately, the background report is poor lacking basic statistics which are essential to fully understand what options are available.

It notably  fails to provide a breakdown of visitor numbers separating residents from others. A demographic breakdown is also missing.

Council officials have  not provided cost centre income and expenditure figures either historical or in business plan format.

They simply say that n additional Council grant of £700,000 would be required to continue “free” entry for residents.

Clearly the present Council have been dropped in a  hole by the previous administration which agreed to fund capital improvement works – the Art Gallery has been closed for 2 years now – in the belief that this would encourage more paying visitors (and thereby make up for a reduction in revenue grant of £900,000 over the last 3 years).

What is unclear is what agreement the Labour administration came to with the Museums Trust on the way that the reduced grant would be funded. The suspicion remains that Labour did a deal on the re-introduction of charges but were unwilling to publicise it before the Council elections.

The York Museums Trust is now  a £10 million a year business following the decision, taken in the last decade, to transfer management responsibility for Museums and the Art Gallery to it.

Ironically when the transfer was made (the assets remain in the ownership of the Council) one of the Trust’s first acts was to scrap admission charges at the Art Gallery.

Compared to entry charges at other venues in the City (Minster is £10, Jorvik £10-25, Railway Museum – free) and  elsewhere in the world higher charges apply (Museum of Modern Art in New York is $25), the fee is relatively small. Under current proposals, York residents would get free entry on 2 days a year.

There is now no way back for the Council. Its budget was shot to pieces by the “gap year” antics of the last inexperienced Labour Leadership.

The, now coalition run, Council  is rightly trying to bring street level public service standards up to an acceptable (safe) level. It doesn’t have hundreds of thousands of pounds available to increase art gallery subsidies.

All that the new Council can hope to do is negotiate a reduced “casual” entry fee for YorkCard holders.  £5 might be regarded by many as reasonable, if children were given free entry.

Such a concession might be seen as an acknowledgement of the 10% of its income that the Museums Trust gets from York Council Taxpayers.

If this meant non Yorkcard holder paying more, then we suspect few would complain.

But first the York Council and the Museums Trust must ensure that all the facts are on the table.