A resident has started an electronic petition on the Council’s web site opposing plans by  “Make it York”  to demolish the fountain on Parliament Street. 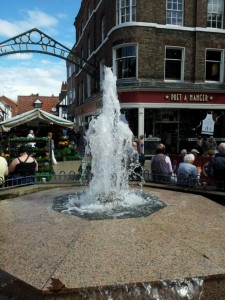 Any change in the Parliament Street area is likely to be controversial and there is now a broad acknowledgement that the QUANGO, at least, jumped the gun and that it should have consulted more widely before publicly backing the change.

How many people are actually bothered about the future of the fountain – which is 25 years old and has been switched off for the last 3 years – remains to be seen.

The underlying question remains just how much power has the Council delegated to Make it York?

Most Councillors believe that the Council did NOT transfer to that organisation any right to change the infrastructure in, or layout of, the City centre (or anywhere else for that matter)

The petition can be supported by clicking here