A response to a Freedom of Information request has revealed that the York Council stopped counting the number of complaints it was receiving about litter 18 months ago! 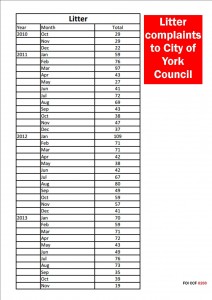 Monthly figures have been provided only up to November 2013.

The decision not to record complaints co-incided with Labour’s cuts in the number of litter bins provided in the City.

Anecdotal evidence suggests that litter problems are worsening in many parts of the City.

The Council recently announced further cuts to litter bin provision in sub-urban parts of the City including Foxwood Lane.

2 thoughts on “York Council “doesn’t know” how many litter complaints it is receiving.”