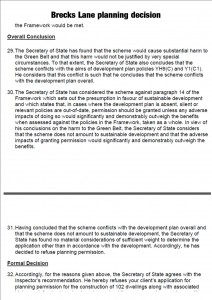 A proposal to build 102 houses on land next to Brecks Lane in Strensall has been turned down by the Secretary of State,

He “called in” the application after 9 Labour Councillors outvoted 7 Opposition Councillors to approve it at a local Planning committee meeting held on 24th February 2014. At that time the Council still had an overall Labour majority under the leadership of Cllr Alexander.

The Minister said that the refusal was because the site was located in the Green Belt.

This has a major significance for other peripheral sites around the City which were to be taken out of the Green Belt under Labours “Big City” expansion plans.

Now the draft Local Plan – rejected by the Council in October – has received a further blow.

It is good news for threatened sites in Woodthorpe, Foxwood Lane and between Acomb and the A1237, as all are in the currently defined Green Belt

The full decision can be downloaded by clicking here

No decision will be taken on the Local Plan now until after the Council elections on May 7th.

There are around 5000 outstanding planning permissions for new homes in York. The majority are on “brownfield” – previously developed -land.

“I am delighted that the Secretary of State has refused planning permission for this site. Crucially, the ruling completely undermines a number of claims made by the Labour Cabinet and further discredits their Draft Local Plan.

“The ruling recognises that the land is in the Green Belt and development should therefore be blocked in order to protect York’s character and stop unrestricted urban sprawl. It shows that even without a Local Plan in place it will not be open-season for developers in York’s countryside.

“Crucially, the ruling supports the view that preventing development on this site, and on other Green Belt sites, will encourage development of brownfield land. This is why the Liberal Democrat Group has consistently advocated a brownfield first building policy.

“The ruling says that only in very special circumstances should Green Belt land be developed. Labour have not demonstrated that those circumstances exist for this or other sites across York.

“With so many undeveloped brownfield sites it is imperative that these are developed before a further attempt is made to bulldoze the Green Belt. Labour’s housing policy is once again in tatters and a radical rethink is needed.”