The York Council has revealed that – according to a well established agreement – taxis fares should be reduced from April.

The Council has – in response to a Freedom of Information request – published the latest index which is used to assess fare level increases.

The formulae was agree in the last decade as a way of stopping the horse trading which took place each year when the taxi trade sought a fares increase.

The table takes into account increases (and reductions) in several costs that taxi proprietors face. These are:

The factors are then given weightings.

The formulae for the fare review now due, indicates a reduction of -0.77% in fare levels is required. 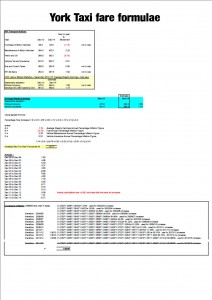 The reduction will be the first since 1998 and is almost entirely down to falling fuel prices.

Passengers expecting a bigger reduction will be disappointed as most of the drop in fuel costs has occurred since the beginning of January (and would impact on next years calculation).

A copy of the calculation can be downloaded by clicking here

Passengers will now be turning their attention to local bus companies who have also enjoyed the benefits of lower fuel prices.

It only seems fair that public transport users should share in the benefits of lower inflation.