“Meddling” by Labour Cabinet blamed for £400,000 shortfall in next years car parking income. 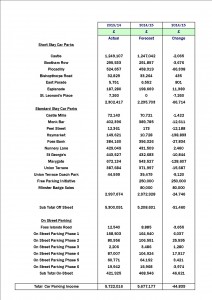 Fewer drivers are paying to use York’s car parks since controversial changes were made by the Labour lead Council. Labour famously doubled some charges when they came to office in 2011 and then tried to mitigate the effects with a series of ill-considered marketing trials.

The biggest drop predictably comes at the, now closed, Haymarket car park where nearly £150,000 a year in income has been lost. The site was sold by Labour two years ago as part of a much bigger land deal which also saw the former ambulance station and Peasholme hostel sites in Hungate included in the sale package. The sale to an insurance company, at the depth of the recession, bought in little over £2 million; less than half its present day value.

The parking income figures were revealed to members of a scrutiny committee which is chaired by Cllr Andrew Waller.

The reports also revealed that only around £80,000 has been paid by drivers for the, £20 a time,  new style Minster badges which entitle users to free evening parking and day time discounts. This suggests that sales levels were exaggerated last year. Over 30,000 of the old (free) badges were in circulation

The cost of the “free parking” days is put at £250,000 a year. It is unclear whether the Council will be able to afford to continue the scheme into the new budget year.

The introduction of barrier controls at the Marygate car park may have contributed to a £128,000 fall in income at that site.

The only car park performing significantly above financial expectations is Esplanade (which has been designated as “short stay” for several years now).

“On street” parking income is performing above target, but accounts for less than 10% of the Councils income.

The Council has now been forced to reduce its forecast of car parking income for the forthcoming year by £400,000 meaning that savings on other public services will have to be made.

The Councils decision to tinker with car parking charging arrangements has proved to be damaging to the City.

We hope that they will allow things to stabilise over the next few years.