An article in “Construction Enquirer” has claimed that the new Community Stadium will be built by ISG. 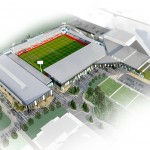 ISG is a Yorkshire based company.

The article claims that the stadium will be completed in “Autumn 2016”.

That conflicts with the July 2016 occupation date previously publicised by the York Council and means that the football club may not be able to move home until the 2017/18 season.

The delays will come as no surprise to the many commentators who have queried the 15 month construction timetable.

The scheme has yet to get planning permission while the future of the Knights Rugby team is under question following a very public disagreement between a senior Council official and the Knights chairman.

ISG has been confirmed as the preferred construction partner for the £41m York Community Stadium and Leisure Complex scheme.

ISG will be part of the successful consortium bid by Greenwich Leisure Ltd to build a new home stadium for York’s professional football and rugby teams including leisure, retail, office and community facilities.

The new 8,000 all-seater stadium will include hospitality and conferencing facilities, a new 25m six-lane swimming pool, fitness and active play facilities and a community hub.

Work is expected to start on site this summer with completion scheduled for autumn 2016.

ISG is believed to have beaten rivals Carillion and Barr to the deal.

Danny Murray, ISG’s Northern regional managing director, said: “Our involvement in the York Community Stadium project extends back to 2012 and we have worked closely with GLL and our consortium partners to bring the vision for this keynote regional leisure scheme to reality.

“ISG has exceptionally strong leisure sector credentials, delivering iconic sporting venues like the Olympic Velodrome and the National Football Development Centre in Newport, and we are looking forward to working with our consortium partners to create superb new facilities for York.”