More of the York Councils decision making powers are to be handed over to an unelected body tomorrow (Tuesday) The Council’s Cabinet is being recommended to approve  the transfer of “marketing, culture, tourism and business development” activities to a company called “Make it York” (MiY).

The new company will have a budget of around  £4 million a year. Much of this will come from Tourism activities although the Council will transfer its Shambles Market (£241k),  Tourism (£232k), Science City (£100k), Economic Development (£337k) and Cultural activities (£229k) budgets into MiY control. 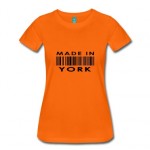 As well as tourism, the company will be responsible for an eclectic range of activities including “Christmas Lights”.

The Council’s interests on the Board of Directors will be represented by the Council Leader and Chief Executive.

Some will feel that the second Council seat should be allocated to an opposition Leader, rather than to a paid official. This might improve the chances of a  consensus emerging on priorities and could give the company a life expectancy extending beyond May 2015

The move comes in the wake of a series of decisions which have, in recent years, steadily eroded  taxpayers influence over how their money is spent.

As well as the Museums Trust, the City’s Libraries and Archives are now managed by an independent organisation. In fairness, both  these organisations have so far been relatively benign and seem to be sensitive to users views.

Strategic transport and economic development powers have been partly transferred to a “combined authority” which has its headquarters in Leeds. Feedback from this body is poor with the decision making process largely impenetrable for the average resident.  There will be big questions to be answered about York’s future in the “Leeds City Region” after the Council elections take place in May.

In the meantime, the major criticisms of “Make it York” remain its lack of accountability, transparency and its attitude to the needs of the City’s suburbs.

It could quickly enhance its reputation by publicly backing the Front Street regeneration project.

Residents will want to see the organisation making its decisions in public and will expect it to – voluntarily – agree to respond to Freedom of Information requests.