Any hope, that York’s Local Plan might be agreed for submission to an “examination in public” before the Council elections are due to take place in May seem to have disappeared today.

Labour Councillors refused at a meeting today to remove Cllr Watt – who now sits as an Independent – from the Local Plan Working Group.

They chose to take that line after Watt agreed to back their “Big City” house building plans.

For the next couple of weeks at least, Cllr Watt would be able to attend working group meetings provided he continues to toe the Labour Party line.

The Conservatives will have only one seat on the working group (although, under proportional representation, they are legally entitled to two)

The next Local Plan meeting is not scheduled to take place until 29th January. 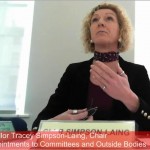 It is to be hoped that the political groups find an accommodation before the “Urgency” committee next meets on 19th January.

Today’s ill tempered meeting will be best remembered for tit for tat accusations about individual Councillors “misbehaviour”. The allegations should more properly have been raised at the specialist “standards committee”.

The promise of the new Labour Leader, to encourage debate about issues rather than personalities, seems to have fallen flat on its face. The “part time” Labour Leader (Williams) was noticeable by his absence from today’s meeting.