The York Council has issued a media release saying that all Councillors are being invited to a (private) briefing session on options for progressing the Local Plan. 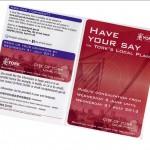 Apparently they will be able to question the consultants who produced the background data that was claimed to underpin Labour’s “Big City” strategy.

It was a tactic which resulted in a  plan which attracted massive public opposition and which was then ditched  at the October Council meeting.

It is unusual for the Council to issue a media release about an internal briefing session.  While any attempt to involve all groups represented on the Council in making important decisions would be a step forward, consultants evidence is often predicated on justifying a given political outcome.

Some fresh thinking, and options, will be expected by opposition councillors

In particular Councillors will be expecting to see robust challenges to both the economic growth assumptions, and resultant housing building plans, which caused so much unrest in the City.

“All City of York Council’s members have been invited to attend a private seminar next month to help progress York’s Local Plan.

This follows the Full Council motion in October, which asked for a further report by council officers on the approach to housing in the city.

The Local Plan Housing Seminarwill take place on 1 December and will provide an opportunity for all councillors to discuss the Local Plan’s housing and employment growth evidence base with the external consultants who provided this information.

The meeting will be independently chaired by Adam Dodgshon from the Planning Advisory Service (PAS), which is a national organisation funded by central government which promotes best practice in planning.

Consultancy ARUP, who produced the housing evidence base for the Local Plan, and Anthony Light from Oxford Econometrics, who worked on the employment growth projections, are also set to be in attendance.

The purpose of the private seminar will be to enable all councillors to ask independent consultants for information and explanations about their evidence base for the Local Plan and enable the council to move forwards towards the publication and submission of the plan.

Following this meeting officers will report back to Local Plan Working Group and Cabinet in due course.