Residents and other key stakeholders are today being invited to comment on a new draft Air Quality Action Plan (AQAP3) for York. 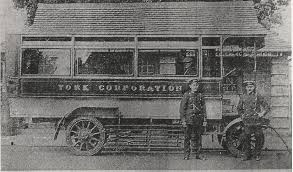 In March 1915 York Corporation Tramways Department was one of the very first operators in the country to use electric buses and to this day, there are still two relics of this pioneering form of transport in the City – the shelters at Clifton Green and Malton Road Corner, which were built as charging points for the buses

The consultation runs from 21 November to 2 January 2015 and provides an opportunity to comment on proposals to further reduce emissions and improve air quality in York during the next five years (2015 -2020).

The draft AQAP can be viewed online at www.york.gov.uk/consultations .

Paper copies will also be available in all York Explore libraries and at West Offices reception.

Support from the government’s Green Bus Fund enabled York to become the first city in the north to introduce a fleet of electric buses to its Park&Ride service and more recently a Cleaner Vehicle Technology Fund (CVTF) grant allowed Transdev to convert one of its tour buses to a fully electric drive train.

The plan includes proposals for a Clean Air Zone (CAZ), development of anti-idling measures (for vehicles) and further development of electric vehicle recharging infrastructure in York. The development of a gas refuelling facility is also high on the agenda.

The aim of the consultation is to achieve a reduction from all types of vehicle emissions, particularly diesel emissions from buses, taxis and HGVs which fall outside the scope of the previous AQAPs.

AQAP3 is the main delivery plan for the measures in York’s Low Emission Strategy (LES) – which was the first strategy of its kind to be adopted in the UK in 2012.

Funding for a total of fifteen electric buses has so far been received in York, when fully operational these new buses will provide cleaner and greener bus journeys for thousands of passengers across the city and will save over 7,500 tons of CO2 emissions in York over their lifespan.

The council monitors air quality at over 340 locations in the city and there are currently three AQMAs in York (city centre and Fulford and Salisbury Terrace area).