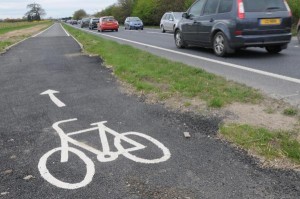 Improvements to the much criticised cycle path built on the A1237 near Wigginton may be coming to a conclusion.

The York Council has published the following legal notice.

Notice is hereby given that City of York Council, not less than 7 days from the publication of this Notice, intends to make an Order under Section 14(1) of the Road Traffic Regulation Act 1984 prohibiting vehicles from proceeding in A1237 York between its junctions with Wigginton Road (B1363) and Haxby Road (closed road) during the period commencing at 1900hrs on the 15th day of November 2014 and ending at 0700hrs on the 20th day of January 2015 (works period) or at time when new Haxby Cycleway Bridge installation works being undertaken by crane operations from the closed road have been completed whichever is the earlier. This is to ensure that the said works can be carried out safely. It is envisaged that the prohibition will only be put in to place, between the following times and dates:

An alternative route for diverted traffic will be available via Wigginton Road, Mill Lane, The Village, York Road, Haxby Road and vice versa. Traffic signs/barriers will indicate the extent of the prohibitions.