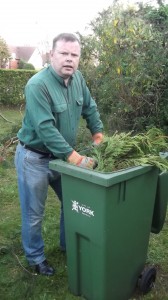 He has sought an assurance that ruling Labour councillors have no plans to introduce a charge covering all green bin collections. At present, residents are charged £35 annually for the collection of a second green bin.

Local Liberal Democrats have highlighted a fall in recycling rates, which has been linked to the scrapping of green waste collections between November and March, and the closure of the well-used Beckfield Lane recycling centre. The tip’s closure in 2012 was ordered by Westfield Labour councillor Dafydd Williams when he was the Cabinet member for Environment.

“Local residents are rightly angry that the council spent £13,000 on leaflets and stickers telling them that green bin collections are free, when we already knew that because it’s what we pay our council tax for. It would be an outrage if Labour were to now perform a u-turn and introduce charges for all green bin collection.

“Many people I have met in recent months are fed up with the green bin collections stopping before the leaves fall, especially now that they don’t have the option of going to Beckfield Lane tip. People who swept up leaves in public areas were doing the council and public a service by dealing with them before they became a slip hazard – but now their green bins are full from the end of October until March.

“I am concerned that any new charge brought in would lead to a further increase in fly-tipping, which of course costs money to clean up.

“People will not put up with any more decisions being made behind closed doors and so I am challenging James Alexander’s Cabinet to rule it out now. They have taken a service which was part of York’s strength as a green city, and trashed it.”