One of York’s renowned City Sightseeing buses has become the first double-decker bus in the world to get an electric makeover, thanks to a government grant. 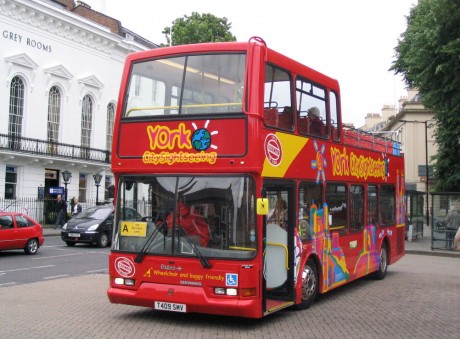 The City Sightseeing bus, operated by Transdev, will be in operation from September after becoming the first double decker to be converted from diesel to pure electric with lithium ion batteries, similar to those used by mobile phones.

The company got  £75,433 in October 2013 to convert the 15-year old City Sightseeing bus to fully electric drive, after successfully bidding for the Department for Transport’s (DfT) Clean Bus Technology Fund. The bus will travel all day without needing to charge.

Baroness Kramer (LibDem Transport Minister) said: “This is the first electric double decker bus conversion in the World. This Sightseeing bus will not only showcase York’s many attractions, but also the huge benefits that low carbon vehicles can bring to our cities.

“The UK is leading the electric charge when it comes to plug-in transport. I am delighted to see York sharing our vision, fully supporting an industry which is also a driver for economic growth, while bringing important environmental benefits such as an improved air quality”.

The electric retrofitted bus will eliminate the emission of 33 tons of CO2 and more than 535kg of poisonous NOx per year and will also reduce operating costs of the vehicle by more than £20k per year.

Richard Jackson at Transdev, said “Thousands of tourists and residents travel on our popular City Sightseeing buses every year so it’s fantastic news that through this funding we’ll be able to offer an even better travelling experience, whilst at the same time helping to improve air quality in York by converting to an electric bus.

“We’re also delighted that we’ll be the first operator in the UK to benefit from this opportunity and have the world’s very first double decker bus electric makeover!”

The transformed bus, manufactured by Sheffield based Magtec will join fifteen new electric buses which will provide passenger journeys on the streets of York from September, following a successfully bid to the DfT for £1,388k in 2013, made available through the Green Bus Fund from DfT.

Marcus Jenkins of Magtec, said: We are delighted to work with City of York Council and Transdev to get the world’s first retrofit electric double decker sight seeing bus into service.

“The retrofit conversion from diesel to electric of the City Sightseeing bus will produce a cleaner, greener transport experience for visitors as they enjoy the sights of York.

“Magtec’s ability to retrofit this type of bus with our electric drive train systems opens up a world of opportunity for similar local authorities and operators to upgrade their existing vehicle fleets. This is the first retrofit system for buses that provide the benefits of zero emission in operation that also makes commercial sense for the vehicle operator.”

This also forms part of City of York Council’s Low Emission Strategy (the first strategy to be adopted in the UK in 2012) which aims to enable the uptake of low emission vehicles and reduce emissions of air quality pollutants and greenhouse gases.

Thousands of people use the City Sightseeing buses every year, including residents and tourists, which supports York as one of the UK’s top visitor destinations.

For more information on bus travel in York visit http://www.itravelyork.info/