The latest timetable for the construction of the new community stadium at Huntington confirms that it is running over  2 years behind the timetable set by the new Labour council when it was elected in 2011. 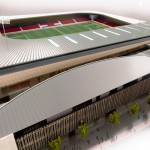 The previous LibDem administration had identified a way of funding the £14 million project and it had been expected that construction would take place alongside the new John Lewis store which opened on 10th April 2014. That part of the project had been delayed by 6 months following the discovery of Great Crested Newts on the site.

The Councils timetable showed a completion date of  June 2014 just early enough to allow the football club to move from Bootham Crescent this year and well before the start of the rugby season.

Council papers now reveal that final tender papers are only due to be received this month and that the Labour Cabinet is therefore unlikely to award a contract before its meeting on 2nd September 2014.

It could then be 4 months before a planning application is submitted.  Although the principle of the stadium use has already been established, there is likely to be a 3 month delay before the proposal reaches the Planning committee in March.

March 2015 (just 2 months before the next Council elections) was the absolute firm date given by the present Council Leader for a start on site – but that new looks increasingly unlikely.

Construction work will take two years, so there is now doubt about whether the stadium will be ready for the start of the 2016 football season.

The delays also impact on the running of other major leisure facilities in the City – such as Energise – which the Council wants to include in an all encompassing management contract.

NB A question on the progress being made with the leisure contracts was tabled at the last Council meeting but no response from the responsible Cabinet member has yet been published.