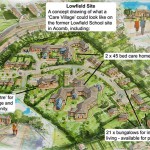 Survey results highlight a lack of communication by Council

A door to door survey undertaken in the Lowfields and Tudor Road area over the last few weeks has found growing dissatisfaction with York Council consultation arrangements.

Residents say that they have heard little from the Council about the delays to the retirement village which was to have been built on the former Lowfields school site.

Originally expected open last year, work on the village has yet to start as the Council struggles to find partners and funding for the project.

A few weeks ago one section of the Council proposed building on all of the school playing field – the original intention had been to restrict building to the school ”footprint”.

The enlarged proposal was opposed by planners but concerns remain that the idea might be revived.

63% of respondent to the survey though that part of Lowfields playing field could be retained as a nature reserve. 29% opposed the idea while 8% were undecided.